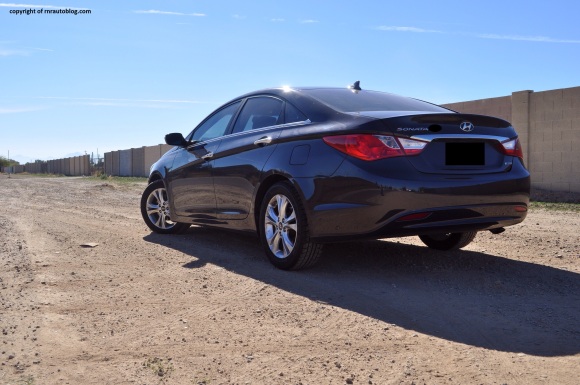 Rewind to 15 years ago, and it would have been embarrassing to drive a Korean car. This is referenced in the media. In the Fast and Furious Tokyo Drift film, Han gives Sean a Mitsubishi Evo, and he says, “What, you think I’m going to let you roll in a Hyundai?”. Top Gear’s Jeremy Clarkson says your life has hit rock bottom if you drive a Hyundai Accent Diesel. A long time ago, a girl asked me what car she should get, and I said, “You should get a Hyundai”. Big mistake. She never talked to me again. Point is that Hyundais and Kias (Hyundai owns Kia) have always been burdened with the reputation of being cheap and mediocre cars. It’s funny how things can change in time. The Hyundai Sonata always had been a left field contender rivaling the likes of the Toyota Camry and Honda Accord. But the Sonata was redesigned in 2006, and it became a decent family sedan with a roomy interior and civilized road manners. It sold well, but it still trailed the better family sedans. Enter the sixth generation Hyundai Sonata. The Sonata attempts to build on the fundamentals of the earlier sonatas while using eye catching styling and fuel efficiency to garner sales.

There is no doubt about it. This isn’t your basic retail manager’s Hyundai. This Hyundai has curves, and I do not mean figuratively speaking. Everywhere on this car, there is a wavy line. At first glance, this car is stunning but the front ruins it for me. It is too overly styled, with prominent creases above the fog lights and below the headlights. The grille is too fussy, and I am not a fan of the hood lines running through the grille. The side profile has a bold character line that starts at the fender and makes its way to the rear lights. The sloping roof line accentuates the Sonata’s sleek design. One design feature that I do not like is the chrome trim and I’ve noticed this on its twin, the Kia Optima. There is a chrome strip that runs from the headlights all the way to the rear windows. On most cars, the chrome trim lines the entire window space, but not on this. It looks unfinished and unnecessary.  Hyundai did an excellent job on the rear though. The aforementioned character line seamlessly blends in with the rear taillights. It is not as fussy as the rear with just a chrome strip between the taillights. Overall, the Sonata is nicely designed, but could be less over the top. The interior is just as well designed. It looks appealing, and the controls look high tech. 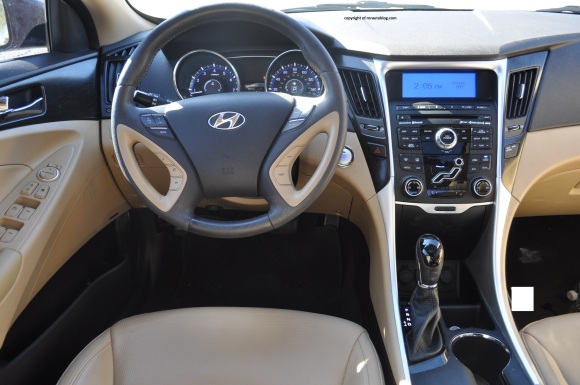 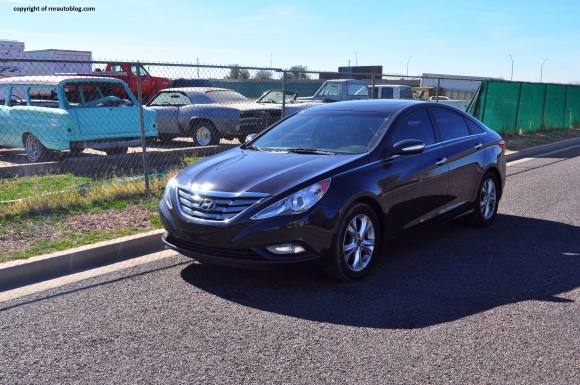 Sadly, this car is one of those cars that looks better than it drives. For the typical customer, the Sonata drives nicely. It does corner well and has decent grip but the steering mars the driving experience. It feels artificial with no real feedback, and I cannot tell what the front wheels are doing. The weighting is off as it changes abruptly. It is light when turning, but it stiffens up noticeably in a straight line. I might be harsh, but it really makes the Sonata feel disconnected. Again, the ride quality may seem comfortable to the average customer but it could be better. On normal roads, it is compliant. But go on anything than smooth roads, and the suspension becomes unsettled. It does not exactly quiver, but it comes close to that. I have driven the latest Hyundai Elantra, and the steering and ride quality are similar to this. The Sonata is an adequate performer in this regard, but it needs more work if it wants to drive the way its styling suggests. 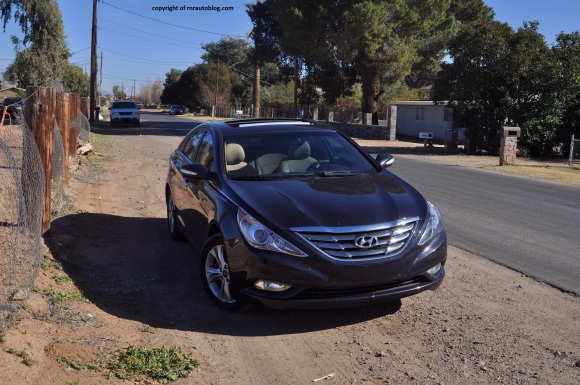 The engine employed is a 2.4 liter four cylinder engine. At 198 horsepower, it has more horsepower than most four cylinder engines from rivals. It is quick and responsive. Fuel economy is excellent with 27-30 mpg overall. The six speed automatic transmission shifts smoothly, and the manual shift feature is decent. 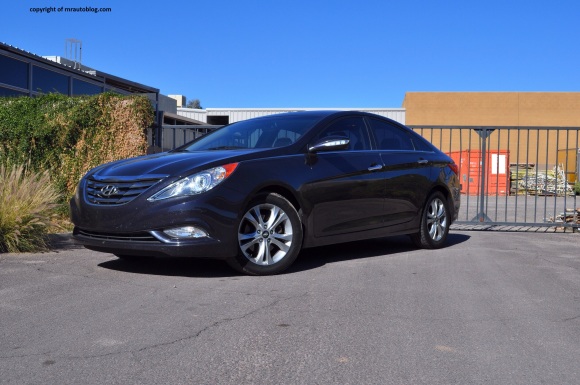 Refinement is a mixed bag. Wind noise is well muted, but there is road noise present and the engine is boomy. Stomping the gas pedal incites an exacerbated hum.

As you get inside, you are treated to a warm and appealing interior. Fit and finish is exemplary. All the plastics and controls are well assembled and reek of quality. One feature that I love is the design for the air conditioning mode. The buttons are arranged according to parts of the body. Similar to Volvo’s design, but a nifty feature nonetheless. The controls are straightforward and well labeled. Despite the sloping roof, visibility is actually not bad. It is not great but it is not bad. The seats are comfortable and supportive. The rear might be a bit short on headroom due to the roof but it is not bad. The trunk is large.

Despite the flawed driving experience, I actually liked driving this car. It just feels more special than a Honda Accord or a Toyota Camry. I enjoyed driving in the beautiful weather with the windows and sunroof down.  Did I feel embarrassed? No. Just the opposite.  Hyundais have always been good cars with amazing value for the price but they were boring. Now with striking styling, the Hyundai Sonata has the whole package. It looks good, has excellent gas mileage, drives well, has good value, and best of all, it can handle family duties. When I say it has good value, I am talking about how this version has leather seats and sunroof, but it costs around $3,000-5,000 less than the equivalent Camry or Accord with the same options. I go on Craigslist frequently just to look at what manual transmission cars are on sale. When a Hyundai Sonata pops up, especially the fifth or sixth generation such as this, I always click on it and check and see if it does indeed have a manual. For some reason, I have always liked the Hyundai Sonata. My great uncle and aunt had a 2001 Hyundai Sonata in West Virginia. It was the top of the line model, and we thought it was fancy (at the time, my parents had a 1995 Honda Odyssey LX and 1993 Saturn SL). My great aunt and uncle would take my sister and I to town in that car. Then sadly, my dad’s brother totaled it. My point is that despite its drawbacks, the Hyundai Sonata will always have a place in my heart. Things get better over time.

Leave a Reply to buy my car Cancel reply