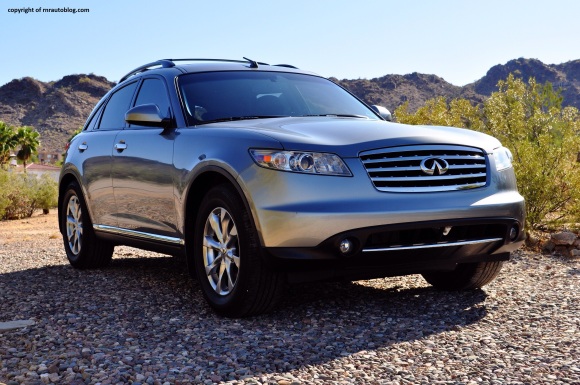 In the 1990s to early 2000s, Nissan’s luxury division, Infiniti, garnered a reputation as a stodgy automaker with its lineup consisting of rebadged Nissans. But this perception changed with the arrival of the 2003 G35. The G35 was actually a competitive rival to the BMW 3-Series and the Mercedes-Benz C Class, and the public noticed as Infiniti set new sale records. The brand’s turnaround prompted a more competitive lineup. Replacing the QX4 (a rebadged Nissan Pathfinder), the FX debuted in 2003. This was before SUVs tried to be less like SUVs and more like cars. The FX was actually based off the Nissan 350z’s platform making it an SUV based off a sports car. Along with the Mercedes-Benz ML, BMW X5, Lexus RX, the Infiniti FX was one of the first luxury crossovers (a car based SUV that combines the height of an SUV with the driving performance of a sedan). In 2006, the FX received new exterior and interior tweaks. 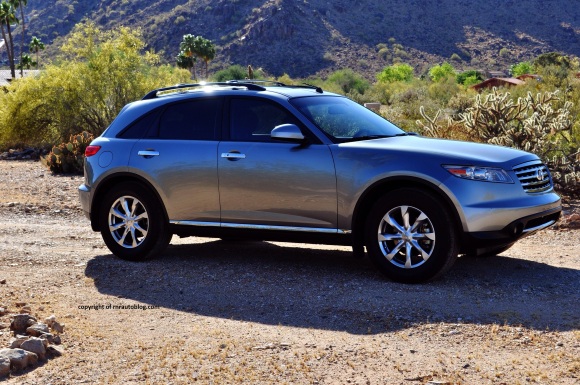 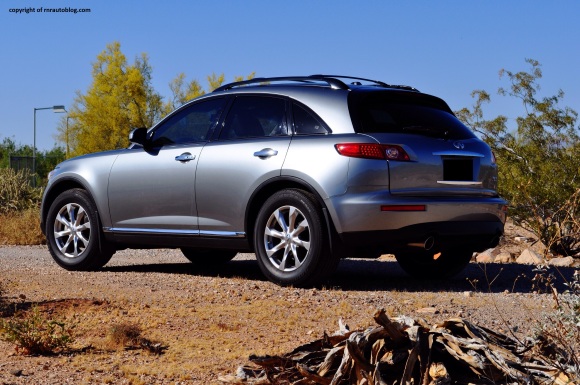 With the FX, Infiniti’s designers came up with a theme called “cool fusion”. This theme is the mix of a rugged SUV lower body with the sleek and elegant upper body more reminiscent of a classic sports car. The razor sharp headlights and the bold chrome grille lend elegance to the design while the long hood hints at the FX’s sporty pretensions. The side profile is the most visually interesting aspect of the design. The line that starts at the beginning of the hood creates a broad shoulder line that slopes dramatically when it reaches the taillight. The sharply raked windshield and sloping roof gives the FX an athletic feel. The wheels fill out the arches nicely, which aids its purposeful stance. The rear features distinctive taillights and detailed dual exhausts. The interior has a high tech feel, and the orange lighting is carried over from the 350z. The analogue clock beneath the controls is a classy touch. 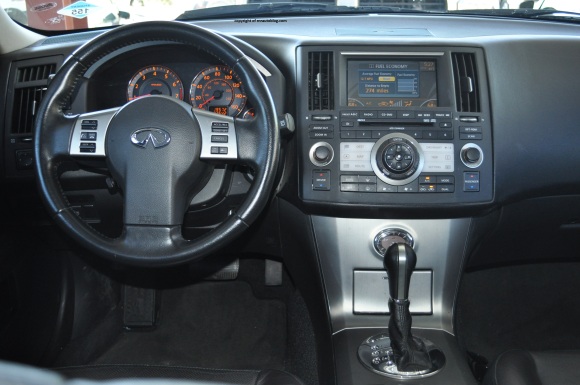 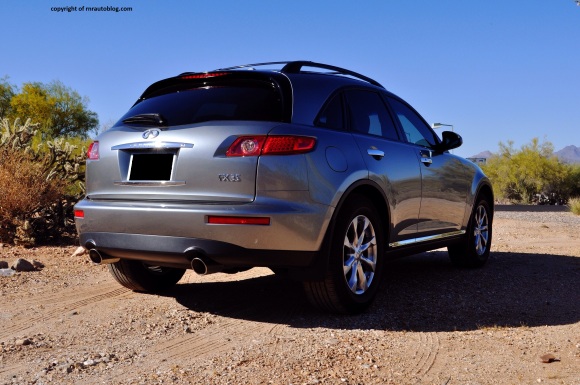 When it comes to handling, the FX excels in this regard. The tires fitted to this FX offer impressive traction. No matter how hard it is pushed, the wheels never lose grip. There is virtually no body lean, and it remains stable and composed. On twisty roads, there are no sudden body movements as you gravitate from one corner to another. The FX’s agility really belies its size. The steering is well weighted, and responds in a fluid manner. It reacts with alarming precision. It is a shame that the steering does not give much feedback. In order to give the FX its excellent body control, the suspension is stiff. Unfortunately, this means that ride quality takes a beating. It is not just firm for an SUV. It’s very firm for a car in general. Road imperfections permeate through the cabin noticeably, unbefitting for a car of this price. Even on smooth roads, the ride never really settles as it is unable to cope with slight pavement changes. 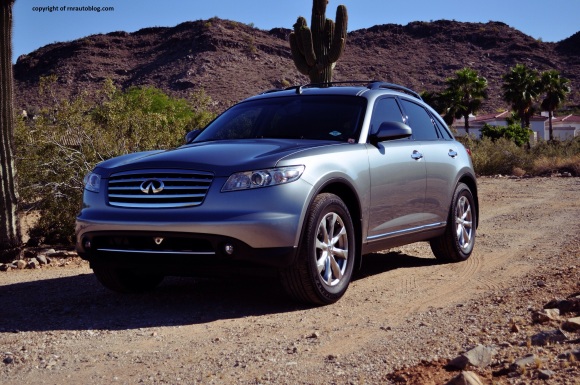 The 3.5 liter V6 is part of Nissan’s VQ engine family. The VQ series are known for their high power outputs, and they are optimized for Nissan/Infiniti’s sporty and luxury vehicles. The 35 in FX35 denotes a 275 horsepower 3.5 liter V6. With its competitors’ standard engines offering around 220-250 horsepower, the FX has the edge on horsepower. The V6 provides effortless power, and it’s easy to peel the tires without much effort. It feels like a V8 as there is abundant torque at any revs. In fact, this V6 is so good, there is no reason to step up to the FX45 which comes with a 320 horsepower 4.5 liter V8. The five speed automatic works well most of the time, but during hard acceleration, it takes its time shifting between gears. The manumatic function is superb, as you actually have full control. Most manumatic modes don’t let you have full control. It holds revs until the redline, and it will continue to do that unless you “shift” to another gear. 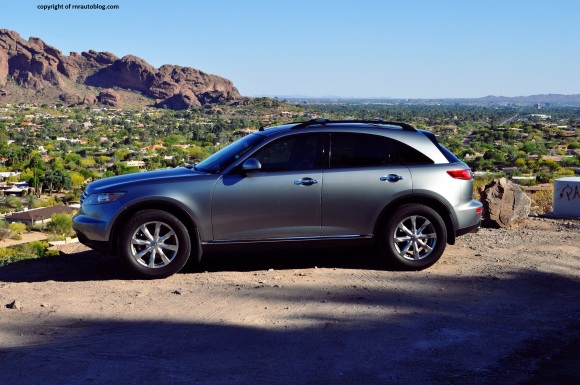 In keeping with its luxury mission, the FX35’s cabin remains hushed. The engine’s hum is subtle, but it becomes very vocal when strung (in a good way). 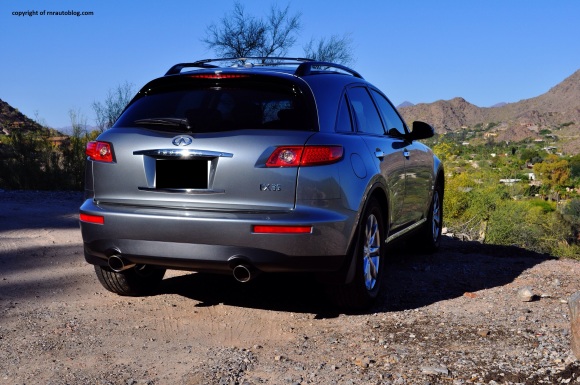 The first thing that you notice when you get in the driver’s seat is how snug the cabin feels. The cabin is not very airy, and for some people, it can feel cramped. With that in mind, it is very easy to find a comfortable driving position. One feature that I love is that when you tilt/telescope the steering wheel, the gauges move with the steering. Another feature that caught my eye is the use of hard keys for the navigation system. The latest luxury cars’ navigation systems are becoming needlessly complicated with no hard keys for the radio, AC, etc. You have to go through many steps through the screen just to get to a simple function like changing a radio station. In the FX, you can just access the radio or the climate control system via a button. The graphics are a bit dated, but the navigation system works well for the most part. The seats provide excellent bolstering for the corners, but its firm cushioning can be tiring for some people. One of the main criticisms of the FX was directed towards its poor visibility, and I can attest to that. The sloping roof may look great, but it severely impedes rear visibility. If you are driving, and want to make a lane change to the left, you will have to rely on the mirrors instead of the over-your-shoulder view. Space in the rear is just adequate, as legroom and headroom is not the best. Even though the FX is a big car, this is not reflected in its cargo size. If you are the kind of person who values cubby spaces to store your various items, the FX may disappoint with its average cabin storage. 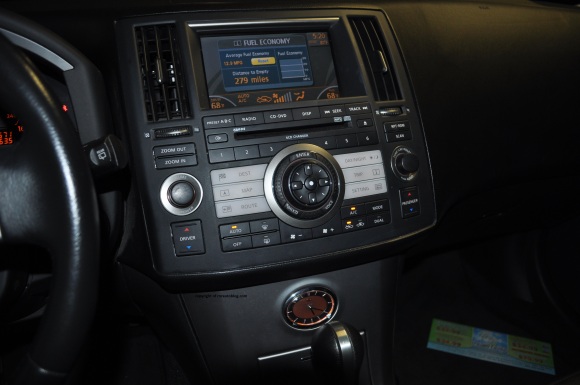 As a car guy, I live by the rules that a real SUV is one that is based off a truck platform, and has no intentions of looking like a sedan design wise. I still don’t consider the FX as a true SUV , as it vibrates and rattles in distress when going less than five miles per hour on anything off the pavement. But it is a true crossover. This is one of the first of its type, as the SUV market did not really pursue the crossover route until recently. Whereas the BMW X5, Lexus RX, and Acura MDX are based off the BMW 5 Series, Toyota Camry/Lexus ES, and Honda Accord, the FX is based off the 350Z’s platform. It actually has undisputed sporting credentials. The FX’s focus on driving dynamics is refreshing considering the sheer number of family oriented luxury SUVs, and the FX is probably the only SUV that makes me smile when I encounter a twisty road. Its uniqueness stems not from its label as a crossover, but in the way it drives. If you value space and comfort for a family, then look at the Acura MDX. But for something that is different with a focus on driving enjoyment, the FX is hard to beat.