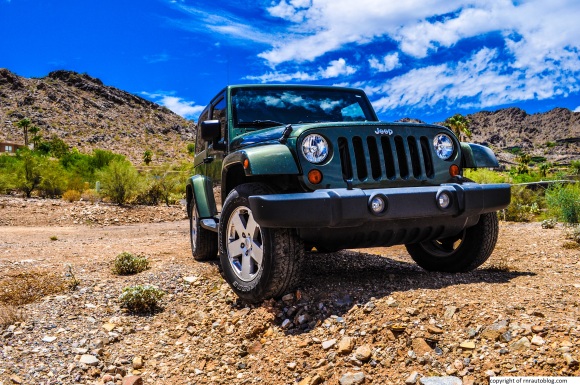 There are many things that I do not understand about the world: the existence of Keeping Up with the Kardashians, the difference between turtles and turquoises, and why everybody is obsessed with the Jeep Wrangler. Don’t get me wrong; the Wrangler’s cool factor is sky high, and there’s no manlier car than a Wrangler. But what perplexes me is why everybody has to have one. The Wrangler has a long history that dates back to the 1940s, but it wasn’t till the later generations that the Wrangler became popular. The 1997-2006 TJ generation (Wranglers’ generations are classified by code names) that I reviewed back in December was a fun and supremely capable off roading machine, but as a SUV overall, it was way too compromised to make me want one. The TJ was loved by only the diehard off roading enthusiasts and some individuals of the general population. But when the redesigned Wrangler debuted in 2007 (code named JK), all of a sudden everybody wanted one. The JK generation featured many new firsts that were not previously available with the previous generations. This generation offered a four door body style dubbed “Unlimited”,  its first ever navigation option, power windows, and remote locks. Despite its popularity in my hometown, I never got the chance to review this generation. The reason being is that if I am going to review a Wrangler, it better be a two door and a manual. Sadly, the increase in the Wrangler’s popularity also correlates to more consumers buying the Unlimited with an automatic transmission. But this summer, I finally got the chance to review a proper Wrangler in two door configuration with a stick. 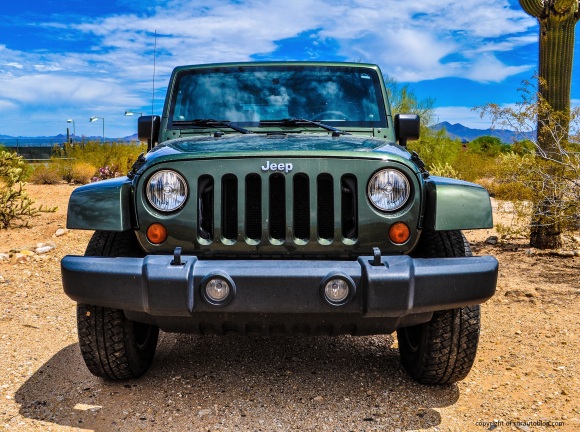 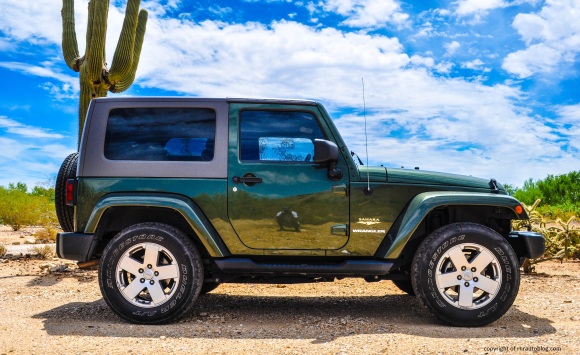 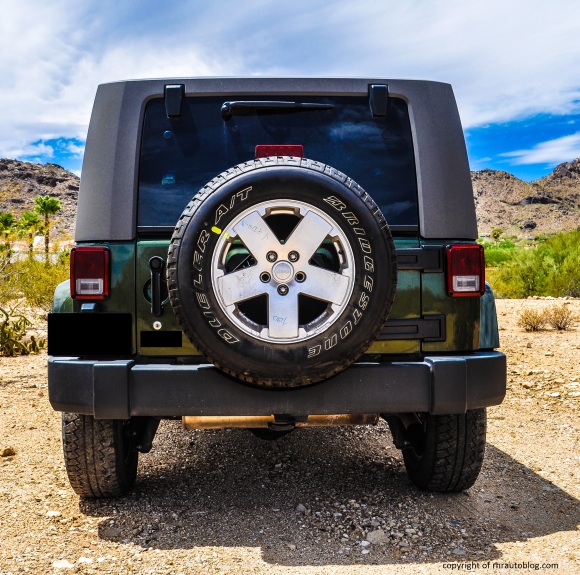 Evaluating this Wrangler’s design is tricky, because its overall appearance is similar to the older Wranglers, but at the same time, it looks relatively modern. The round headlights remain as does Jeep’s traditional grille with seven vertical slats. By looking at the front, it becomes apparent how circular the appearance is. The fascia of the headlights and the grille have a circular outline at the edges, and the lights itself are round. I think it is a nice evolution of the previous gen. The side profile is as boxy as it can be. The upright windshield, square windows, and the blocky fenders give it a LEGO quality. It looks like it is constructed rather than designed, and that is not necessarily a bad thing. Same thing with the rear; it is boxy as well with square taillights and rectangle tailgate hinges. I think the Wrangler’s exterior is nicely done, as it still manages to look modern while staying true to its heritage. I wish the same thing can be said for its interior. There’s nothing fundamentally wrong with it, but a Wrangler is a retro vehicle, and it deserves a retro interior, not a generic Dodge/Chrysler/Jeep interior. 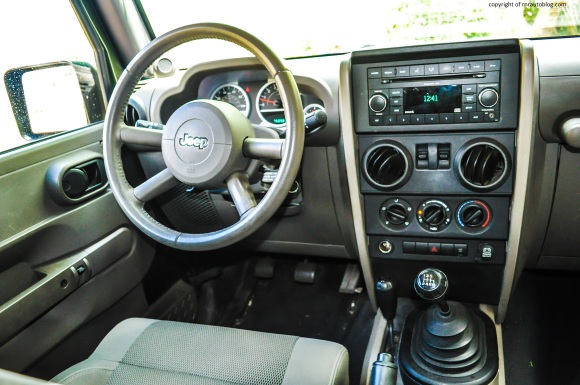 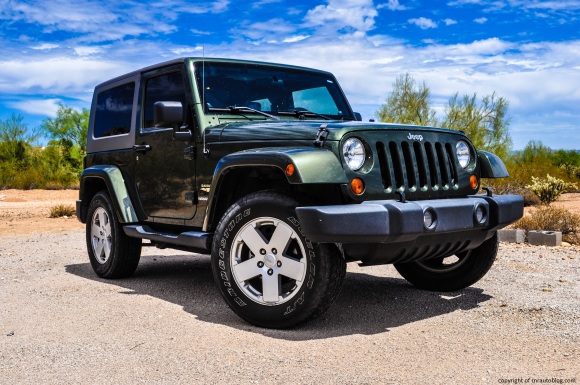 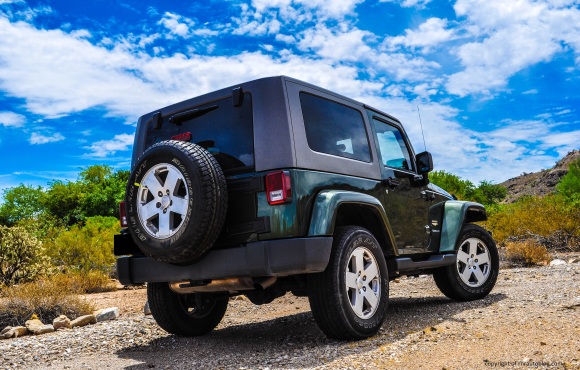 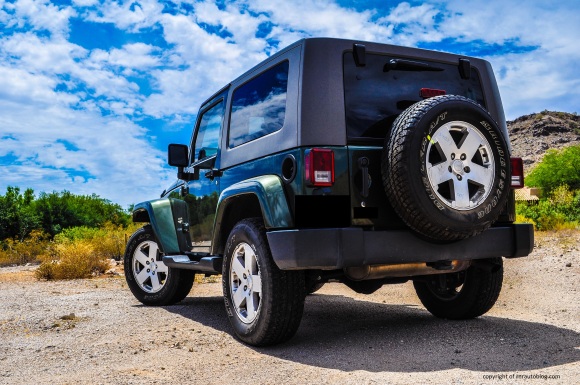 Where this Wrangler excels is in its offroading ability. With excellent ground clearance, impressive wheel articulation, and effective 4WD system, this Wrangler has no problem tacking tough terrain.  However, this emphasis on its off roading performance means its handling is compromised, just like the previous Wrangler. While it is marginally better than the 2005 Wrangler, its handling is still lacking. When you turn the wheel, the wheels take a second before actually turning, and even then the steering remains imprecise. The steering also lacks feedback, and there is considerable body lean. When pushed, it plows straight ahead when turning, and the tires don’t grip well enough, and you do get the sensation that you will flip the Wrangler any second if you turn suddenly. I also noticed an unusual quirk; when you suddenly change direction, the structure flexs like as if the front end and the rear end are trying to separate (although this wasn’t noticed when going off road). The ride is not as stiff as the previous generation, but it is still too jiggly on all road surfaces to be compliant. 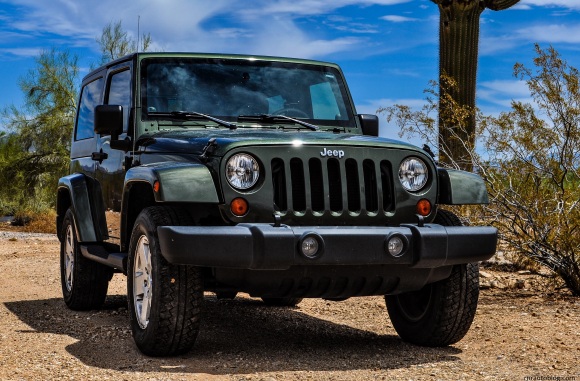 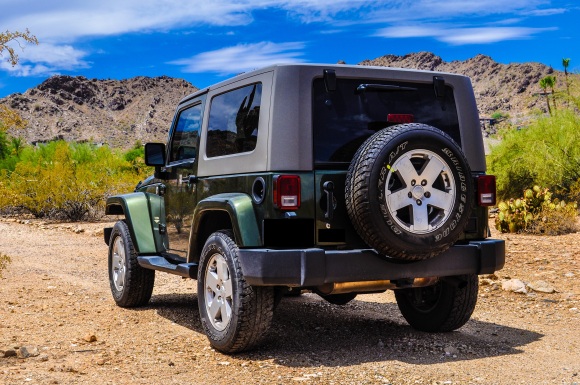 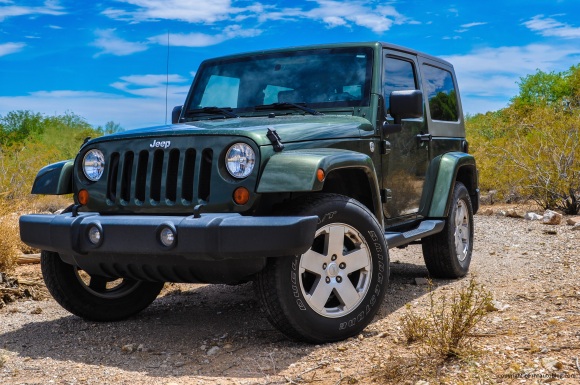 Pertaining to the Wrangler’s old school charm, this Wrangler used an outdated 3.8 liter V6 when it debuted in 2007. Just how old is this engine? Well,  Jeep as well as Dodge and Chrysler (Jeep and Dodge are owned by Chrysler) first started using this engine back in 1991. Periodical modifications increased the original 164 horsepower count, and in the Wrangler, it made 202 horsepower. In normal driving, it works fine enough, and it’ll get you from point A to point B. It accelerates leisurely, and you really need to push the engine for better performance. The engine feels strained, especially on hills in which you have to shift down a gear often. The six speed manual transmission shifts into gear well enough, but it is too clunky when shifting fast. The clutch has long travel, but it gives decent feedback and bite. A four speed automatic was available, and in 2012, it received a 3.5 V6 with 285 horsepower and a five speed automatic transmission. If you are looking for good fuel economy, this is not the vehicle for you as it gets around 15 mpg on regular fuel. 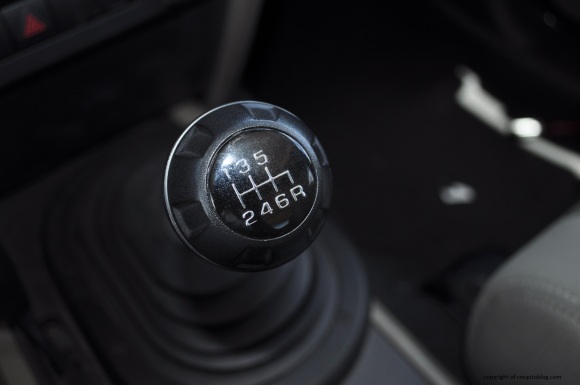 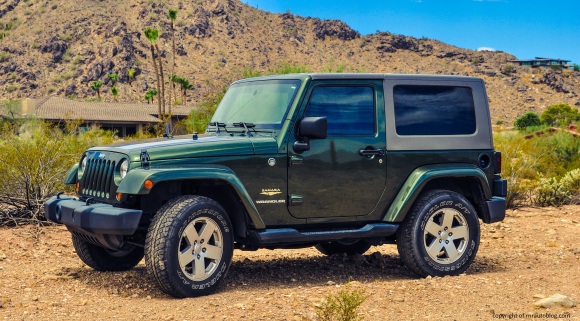 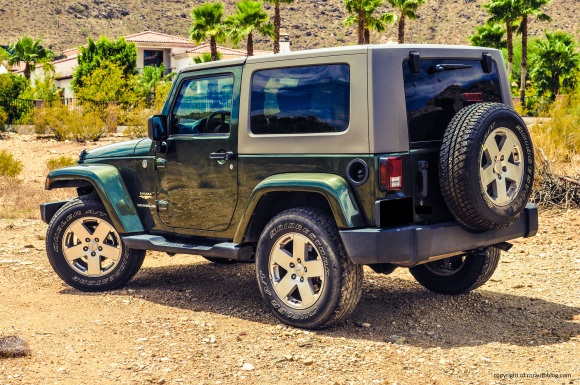 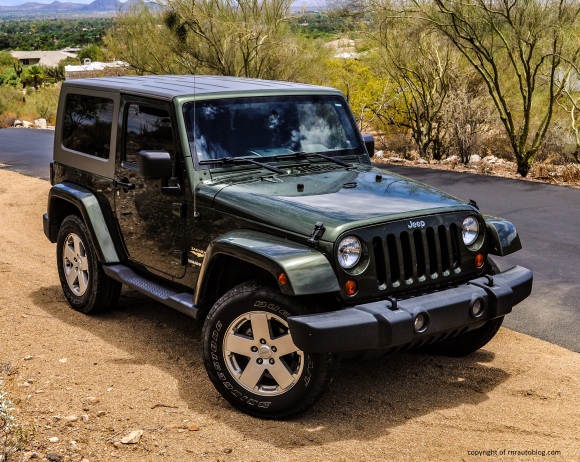 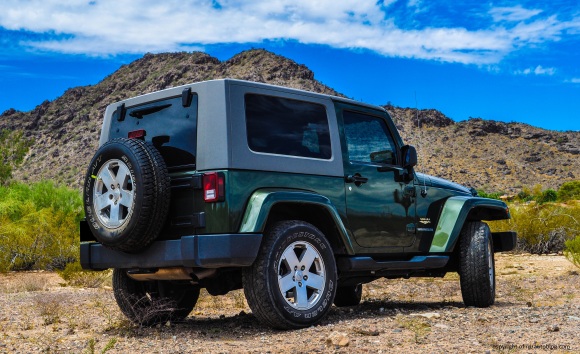 The removable top lets in considerable wind noise, and there is a lot of road noise from the chunky tires. The V6 feels strained at speed, and it sounds like it, especially if revs increase. 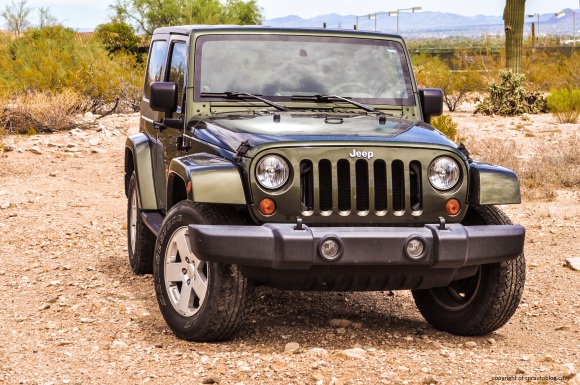 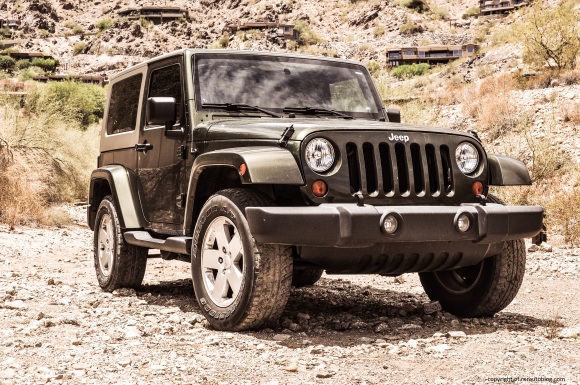 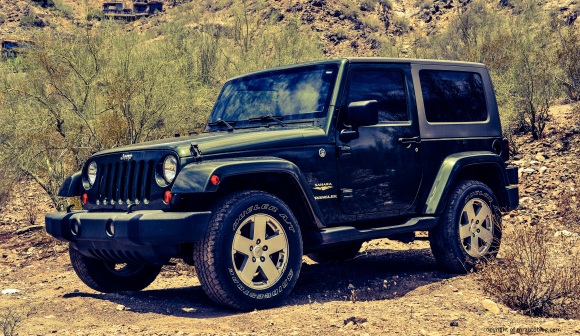 As with other Dodge, Chrysler, and Jeep products before 2012 (when all of the vehicles got a comprehensive update with better engines and higher quality interiors), the interior features rudimentary fit and finish with hard to the touch surfaces and misaligned panels. The armrests on the doors have sharp edges, and the buttons feel brittle. The controls and the gauges are easy enough to comprehend, and the seats provide commendable support. Due to the long clutch travel, I had to pull up my seat so I can fully depress it, but this resulted in being far too close to the steering wheel. The tall cabin affords plenty of headroom but the cabin itself feels snug. There is adequate space in the front, but the rear is cramped with barely any legroom. The space behind the rear seat is small as well. Getting into the Wrangler is a struggle due to the high step in, and getting into the rear seat is even worse. Visibility up front is decent, but rear visibility is blocked due to the spare tire and the thick pillars. However, I will admit that it does provide a commanding view of the road as you really do feel like you are king of the road. 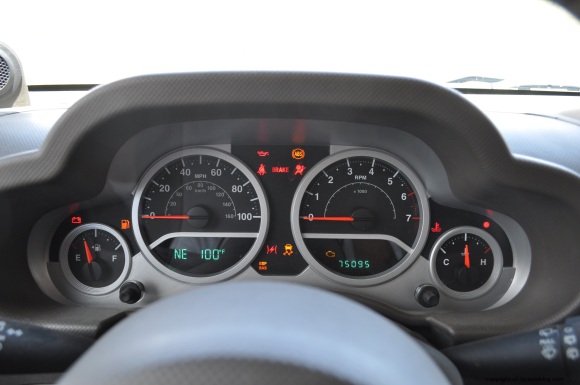 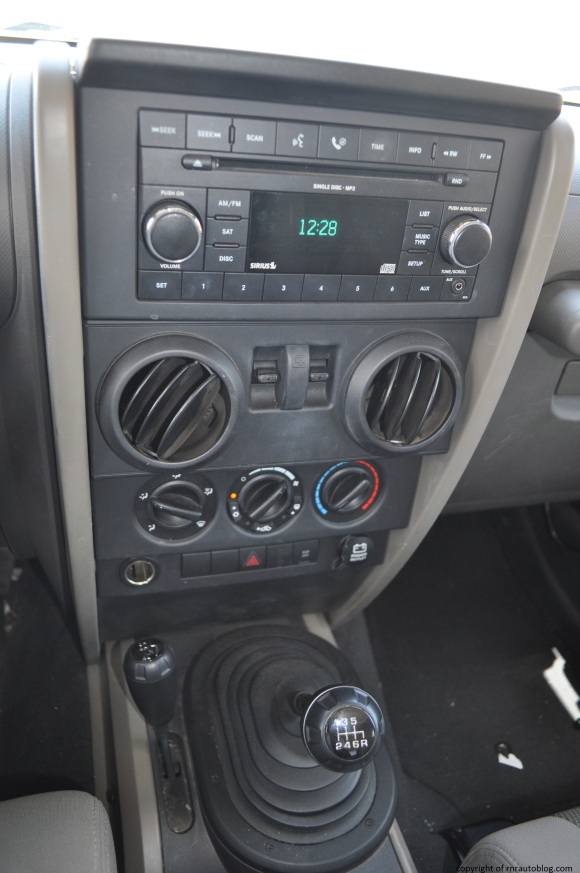 After revewing this Wrangler, I understand why this is universally loved, and it is the same story with the 2005 Wrangler. You don’t buy a Wrangler because it is the rational choice; you buy it because it has charm and the looks. The Wrangler has a strong heritage that calls back to the 1940s’ Willy Jeep, and you can feel it in this car. There is a tangible sense of American pride when you drive this car. You literally want to shove your American patriotism in people’s face and say, “Murica!!” Sure, its driving dynamics are terrible, it’s slow, fuel economy is a joke, and I can go on. But the thing is that the Wrangler is not supposed to be perfect which is the point. And that’s why I do like it somehow. I just don’t like it enough to want one like most people do, even if it is a manual. 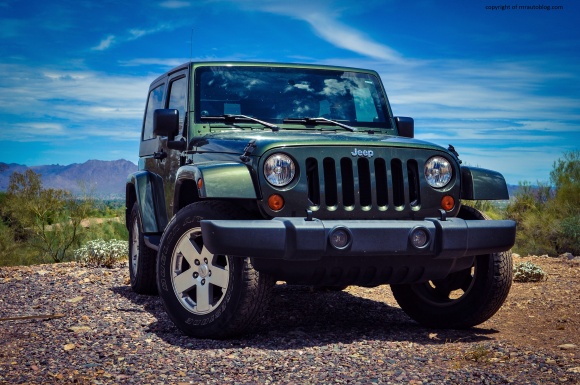