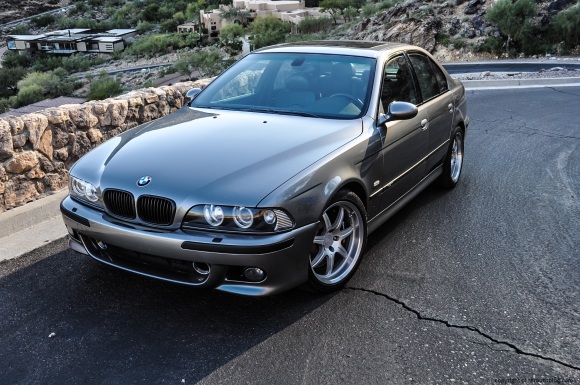 When I was little, I got my first car game to play on the computer, Need for Speed Hot Pursuit. Remember the Need For Speed series? How I miss the days of NFS Underground, Hot Pursuit, etc. In the Hot Pursuit game, one of the cars featured was an E39 M5 (BMW cars are classified by their generations so the 1996-2003 5 Series is the E39), and I became enamored with its power (in the game) and its styling. I never have and probably never will own a brand new luxury sedan, but if I had to go used, the only luxury sedans I would consider buying is the first generation Infiniti M or an E39 5 Series with a manual transmission. The first M vehicle for the 5 Series was the 1980 M535i although it was not badged as an actual M brand vehicle, but it came with performance and visual upgrades. The first actual M5 came with the second 5 Series generation (E28 1981-1988) in 1985-1988 which was only available with a manual transmission and sold in “Jet Black” color only. The next 5 Series generation (E34) brought along another M5 version that was sold from 1989-1995. The E28 and E34 were the last M5 models to be hand built before the E39 arrived. When the E39 M5 debuted in 1998, it took the world by storm. People raved about its 394 horsepower V8 engine, its butch looks, and its overall image as M’s flagship sports sedan. This M5 reviewed here is a Dinan edition; Dinan is a company that produces both mechanical and cosmetic aftermarket products for BMW vehicles.  They also have a long standing relationship with BMW as Dinan modified BMWs are able to retain their factory warranties. Even though this is not the regular M5, I could not resist the opportunity to be able to review one of my favorite cars in the entire world. How desperate was I to review an E39 M5? So desperate that I saw this car in a parking lot and left a note on the windshield asking the owner if I can review the car. Fortunately the owner obliged.  END_OF_DOCUMENT_TOKEN_TO_BE_REPLACED