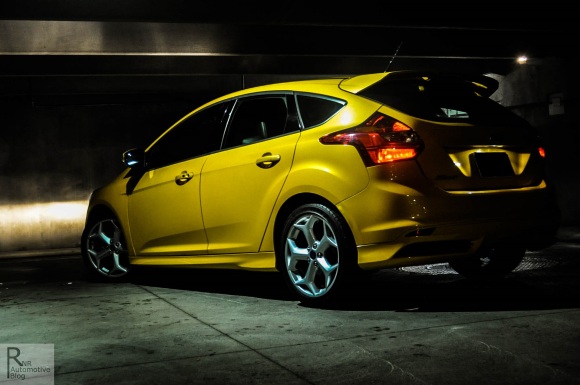 Disclaimer: The interior pictures featured in this article are that of a 2015 Ford Focus ST, not the actual car that is depicted in this review. The 2015 version will appear later in a separate photo shoot article.

You might be asking yourself, “Is that a bright yellow Ford Focus I see? And why does it look like it came out of a Fast and Furious movie?” Ladies and gentlemen, allow me to introduce you to the Ford Focus ST. After reviewing a 2012 Focus sedan, I was impressed at how far Ford had come. With sharp styling, enjoyable handling, decent levels of equipment, I can see why the Ford Focus was a hit with the consumers. It all started when Ford finally consolidated its global models and started producing the same models for every market. Here in America, Ford previously concentrated its efforts on its sport utility vehicles and its trucks and neglected its passenger cars. Meanwhile in Europe, Ford’s lineup was of high quality and class-leading passenger cars. Europeans got a better Focus and Mondeo (European equivalent to Taurus/Fusion) than we Americans did. After the recession hit, Ford decided to combine its global portfolio and produce the same cars for every market. What this means is that we finally get the good cars that Europeans get which brings me to my point. In Europe, there is a very popular segment of hot hatches: sporty hatchbacks that deliver the thrills and performance of a sporty car while providing the versatility and comfort of a family hatchback. Ford did attempt this here in the U.S with the 2001-2004 Focus SVT, but as a two-door/four-door hatchback that was hard to live with on a daily basis, it never really caught the attention of most consumers except hardcore enthusiasts. There was also a 2004-2007 ST version of the sedan, but it was really a half-baked attempt to inject sportiness in the sedan when in reality it was just a top-of-the-line version with a manual transmission. Ford Europe introduced the first Focus ST in 2005, a sporty version of the Focus with 225 horsepower and a top speed of 152 mph.  For the 2013 model year, a Focus ST version was added to the Focus lineup globally. Little backstory behind this car. This car is owned by one of my good friends, and we both are car enthusiasts as well as manual transmission aficionados. The owner named the ST, “Pikachu.” Let’s see if Pikachu is as exciting as its Tangerine Scream paint and rear spoiler suggests.

END_OF_DOCUMENT_TOKEN_TO_BE_REPLACED 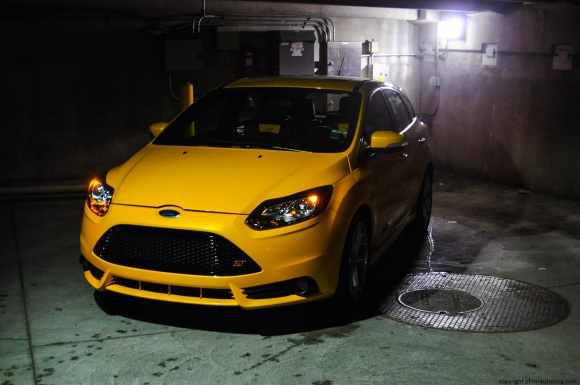 Disclaimer: The Focus I drove was a Ford Focus SEL Hatchback, not this exact car. Driving experience may vary.

Introduced in Europe in 1998, and North America in 1999, the original Focus surprised the world with its’ combination of avant garde styling (hatchback version), unbeatable dynamics, practicality, and affordability. Replacing the Escort, the Focus represented a new era for Ford, in terms of design and handling. It was given a rear independent suspension  which was very expensive and rare for a car of this cost and class, but it gave the Focus unsurpassed dynamic excellence that left its rivals struggling to catch up. Ten years later, the U.S specific Focus has morphed into an outdated and boring compact sedan. Meanwhile in Europe, the Focus was thriving. See, Ford in Europe has a much better reputation as a car manufacturer because they produced substantially better cars such as the Mondeo instead of the Fusion, Kuga instead of the Escape, and so on. They produced a different Focus while we got the same Focus from 1999, albeit “restyled” in 2008. In America during 2005-2011, Ford’s lineup was hampered by its fuel-thirsty SUVs and uncompetitive cars. During the recession of 2008, Ford realized it needed a solution to save its company. They started a globalization strategy, which meant we would get the same cars as Europe did. They started bringing the subcompact Fiesta over here, which quickly became a hot-seller, and the latest Focus that you see here. The Focus has been selling well, abiding to the same principles that made the original Focus such a worldwide success. END_OF_DOCUMENT_TOKEN_TO_BE_REPLACED