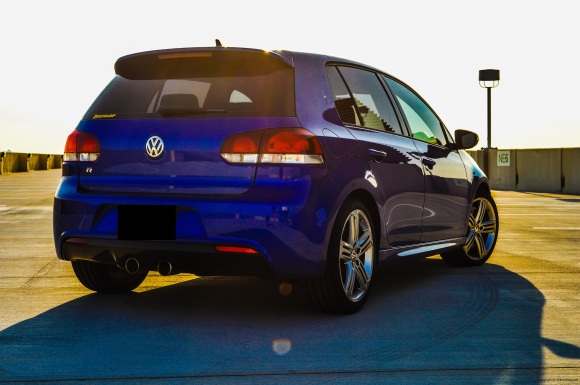 Even though this looks like an ordinary Golf, I can assure you it is not. It is not the TDI diesel, nor the sporty GTI. Rather, this is the high performance R model. The Golf itself is one of the world’s best selling cars, and it all started with the 1974 first generation (sold as the Rabbit in the U.S). Dubbed the MK1 (generations of the Golf are codenamed MK), the front engined and front wheel drive replaced the rear wheel drive and rear wheel engined Beetle. With this generation came the GTI version, one of the first “hot hatches.” In Europe mainly where hatchbacks are the norm, Europeans crave the hot hatchbacks for their blend of high performance and ultimate practicality. As the Golf grew in age and size, so did the GTI. It was not until MK4 generation (1997-2004) that Volkswagen upped the GTI with the R32. In contrast to the GTI’s four cylinder turbo engine (a GTI hallmark) and front wheel drive underpinnings, the R32 employed a 3.2 liter VR6 six cylinder engine and all wheel drive. With 237 horsepower, the R32 was faster than the GTI and considerably more expensive. When the next Golf debuted in 2005, GTI and R32 variants followed. Unlike the first R32, this generation R32 was not popular. It still came with a V6 and all wheel drive, but whereas the previous R32 was exclusively six speed manual only, this R32’s only transmission was a paddle shifter dual clutch automatic transmission. A car like the R32 is supported by a specific community, and the community values European driving dynamics which includes the need for a manual transmission. Volkswagen redesigned the Golf in 2008, and instead of a R32, the high performance variant of the Golf was named “R” which I think is due to the fact it uses a more powerful version of the GTI’s four cylinder turbo instead of its own V6. Having had the chance to drive a MK6 GTI, I was interested in how this MK6 R compares in terms of handling and performance.  END_OF_DOCUMENT_TOKEN_TO_BE_REPLACED