This past weekend, I was lucky enough to attend the Chicago Auto Show. This was my third time, and as expected, nothing compares to seeing a showroom full of cars. Prior to this car show, I was really anxious for the reveal of the third generation 2016 Pilot. My first car was a 2004 Honda Pilot (my sister is currently driving it), and I love it, so as a Pilot owner, I was curious to see whether Honda would continue the blocky styling or go the “mommy SUV” route. And my reaction was…unexpected. Seeing all these wonderful cars in one place, I went into overload with excitement, and all of sudden I could not have the capacity to restrain myself, and as such, I irritated my family because I could not stop talking about cars. Oh well.  Please forgive the quality of my pictures as these were taken from an iPhone.   END_OF_DOCUMENT_TOKEN_TO_BE_REPLACED

Despite all the attention on Toyota’s plain Jane but reliable Corolla and Camry sedans, Toyota did actually have a reputation for making affordable sports cars. Reputable examples of this are the Supra, Celica, and the MR2. In 1976, Toyota came up with a proposal for a vehicle that placed an emphasis on driving dynamics while providing typical Toyota virtues such as reliability, affordability, and fuel efficiency. Akio Yashida, the man behind the original MR2 decided on a mid-engine configuration for optimal handling balance. A company known for its practical and ordinary cars, the  1984 MR2 proved that Toyota could make fun and affordable sports cars. Even though it was powered by small engines, the MR2’s sub 2,500 pounds curb weight gave it unbeatable balance and go kart reflexes. Combine the legendary handling with typically Toyota quality and reliability as well as affordability, and the first generation MR2 would become one of Toyota’s greatest cars ever made. My friend’s mom who currently drives a Mercedes C250 Coupe told me her first car was a supercharged 1988 MR2 five speed. Even though she has had some sweet cars over the years as well as four Mercedes-Benzes, she still claims the MR2 was the best car she ever had, and would buy another one if Toyota still produced them. The MR2 was redesigned in 1989 (North America got the second MR2 in late 1990 as a 1991 model year car). In contrast to the first generation’s angular styling, the second featured curvier and shapely styling. The second MR2 also gained weight significantly and horsepower was increased. While it was commercially successful, MR2 purists did not like it as much as the first due to the loss of delicate handling as an effect of the increased curb weight. In 1999, Toyota redesigned the MR2, bringing it closer to the weight of the first generation, and coined its moniker, MR2 Spyder. Sadly, Toyota discontinued the MR2 Spyder in 2007 (2005 in North America).  END_OF_DOCUMENT_TOKEN_TO_BE_REPLACED 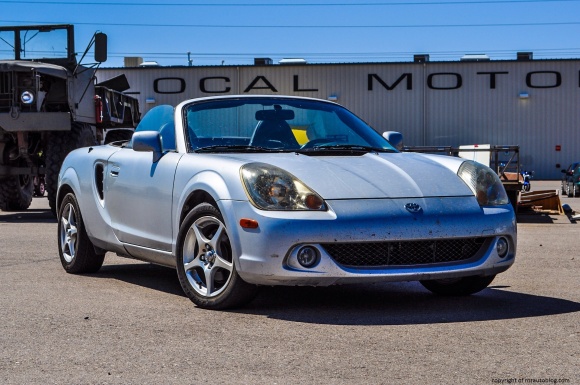 Hey guys, remember that 2002 Toyota Camry LE that I reviewed? Well that was one of my first reviews on this blog, so you probably don’t remember. This car was a member of our family, having been bought brand new in 2002. I remember the car shopping experience. We had just gotten tired of our 1993 Saturn SL, and we were looking to upgrade. That Saturn had around 130 thousand miles when we were looking for a new car in the January of 2002. My dad, a Honda man, inevitably turned to the 2002 Honda Accord as the Saturn’s replacement. But the Accord was in its last year, and the Camry had just launched. My parents wanted to go upmarket, so they looked at the Acura TL, and the Volvo S70. I remember the exact cars that we test drove back in 2002. The Acura TL was silver, and it was a sunny afternoon, and I remember how luxurious it felt (Remember, our Saturn had manual windows and cloth seats!). I was sitting in the backseat, amazed by the center armrest because it had an opening that led to the inside of the trunk! As for the Volvo S70, my parents wanted to look at it because it was supposed to be one of the safest cars you could buy, and where we lived, Volvos were very popular, especially in wagon form. It was dark outside and snowing, and the Volvo salesman led us to this beautiful white S70. It was parked on the lot at a corner by itself, and the streetlights shined on the car. It just looked beautiful under the streetlight, and it had a spoiler and a tan interior. My parents liked the car very much, but they didn’t like that reliability was an issue. However, my parents felt these cars were too pricey, so we looked at the Toyota Camry which was just redesigned. Strangely I don’t remember much about the Toyota buying experience. I don’t remember how we even got the car. All I know is that we looked at the Camry, and my parents loved it. They felt that the Camry offered much more value than the Acura or the Volvo ever did. And then one day, it was in our garage, and the Saturn was parked outside. This being the new car, the Toyota was the cooler car. (At the time we also had a 1995 Honda Odyssey LX). I named the Camry Betty. Because when I think of a girl named Betty, I imagined that she is a vanilla type of woman. Nice and dependable, but not very adventurous, which describes the Camry perfectly.  END_OF_DOCUMENT_TOKEN_TO_BE_REPLACED

In the eighties, Toyota wanted to replicate the success of its Land Cruiser SUV but in a smaller and more affordable package. Cue the 4Runner which debuted in mid-1984 as a 1985 model. Instead of developing an entirely new model like the Land Cruiser, Toyota used the Hilux chassis to create the 4Runner (sold as the Hilux Surf in other countries).  The first generation was nothing more than a pickup truck with a roof over the bed. The purpose of the 4Runner was to provide the versatility and the go anywhere ability of the Hilux truck while giving the comfort and utility expected of an SUV. I reviewed a third generation, a 1997 4Runner which was the first generation to be built as a separate model, not sharing any body parts or frames with the Hilux. I liked it very much, but I never really thought of reviewing the original 4Runner at all. I asked my friend if I could review his old Volvo 242 or something like that. It was a really cool old Volvo in burgundy and with a manual transmission. However, when I contacted him, he sold it and got this 4Runner. How could I say no to reviewing the original 4Runner with only two doors and a manual transmission?

END_OF_DOCUMENT_TOKEN_TO_BE_REPLACED

To tell you the truth, I never knew the Hilux existed until my first trip to England. I got an English car magazine, and there was a road test of the Toyota Hilux. I was confused, because it did not look like anything like the Tacoma we have in North America. I searched the Toyota Hilux online, and I was surprised to learn that the Hilux is another truck currently sold by Toyota everywhere except North America. The Hilux actually was sold in America from 1968-1994, but only the first generation (1968-1973) used the Hilux name. Starting in 1973, it was sold as the Toyota Truck (later called Pickup), and the fourth generation (1983-1988) introduced an SUV version of this truck that became the 4Runner which also was sold as the Hilux Surf in other countries. It was not until the fifth generation of this truck that Toyota would start producing two entirely different trucks for North America and the rest of the world. Toyota wanted to build a truck that catered to the tastes of the American market, while keeping the Hilux. Starting in 1995, the Tacoma was sold as Toyota’s compact truck, with the Hilux sold in other continents. The Hilux grew in size and fame, and became a legend in terms of reliability and off road performance. This summer, I visited Sri Lanka, and I had the opportunity to review a 2012 Hilux to see what we Americans were missing out on.  END_OF_DOCUMENT_TOKEN_TO_BE_REPLACED 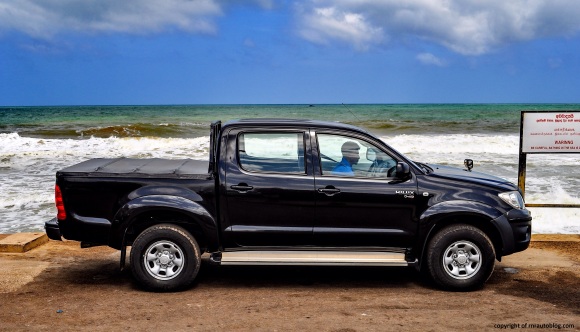 Even though the first Tacoma debuted in 1995, its heritage goes back to the 1964-1967 Stout. Due to its distasteful looks and its spartan equipment levels, not to mention it was significantly slower than competing American trucks, the Stout barely sold in the three years it was produced. The Hilux replaced the Stout in 1969, but due to its reliability, better performance and quality, sales started to grow. The Hilux soldiered on for three generations until in 1976, Toyota changed the name from Hilux to Truck (or Pickup). As Toyota continued to grow in fame and sales, the Truck became regarded as a competitive product that always received praise from the car magazines and consumers. The Toyota Truck lasted till 1995 before being replaced by the Tacoma. While the Truck sold well, it never really catered to the American tastes, and Toyota felt that the Tacoma would change that. This time, instead of being built in Japan, the Toyota built the Tacoma in America, and the name Tacoma was chosen as it was thought to appeal to the American market.  Toyota prioritized refinement and performance, while staying true to its promise of dependability. In the late 1990s when consumers were buying more SUVs and trucks than ever, Toyota’s timing couldn’t have been better. In 2001, the Tacoma received a facelift, and more variants were added. Even in its last year, this generation of the Tacoma still sold well before being redesigned in 2005.