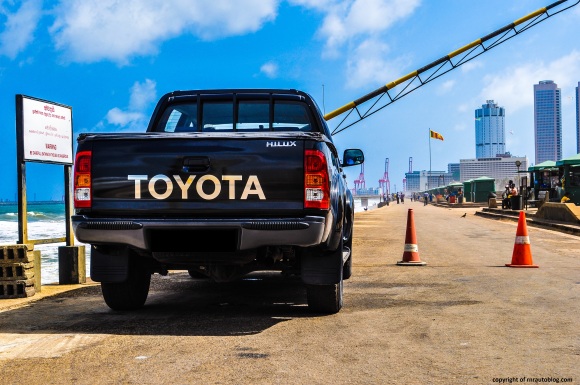 To tell you the truth, I never knew the Hilux existed until my first trip to England. I got an English car magazine, and there was a road test of the Toyota Hilux. I was confused, because it did not look like anything like the Tacoma we have in North America. I searched the Toyota Hilux online, and I was surprised to learn that the Hilux is another truck currently sold by Toyota everywhere except North America. The Hilux actually was sold in America from 1968-1994, but only the first generation (1968-1973) used the Hilux name. Starting in 1973, it was sold as the Toyota Truck (later called Pickup), and the fourth generation (1983-1988) introduced an SUV version of this truck that became the 4Runner which also was sold as the Hilux Surf in other countries. It was not until the fifth generation of this truck that Toyota would start producing two entirely different trucks for North America and the rest of the world. Toyota wanted to build a truck that catered to the tastes of the American market, while keeping the Hilux. Starting in 1995, the Tacoma was sold as Toyota’s compact truck, with the Hilux sold in other continents. The Hilux grew in size and fame, and became a legend in terms of reliability and off road performance. This summer, I visited Sri Lanka, and I had the opportunity to review a 2012 Hilux to see what we Americans were missing out on.

While the Hilux appears to be similar to the Toyota Tacoma, the differences lie in the details. The Tacoma is sharper and angular, while the Hilux is smoother and more flowing. Because this is the basic version (I am assuming), it does not come with a body colored bumper in the front. The gray color bumper looks out of place with the whole design, but that is not where my distaste lies in the front. The bumper features these two short rubber strips on each side. The reasoning behind their placement perplexes me. But overall, the front is appealing if a little plain. The side profile resembles a typical truck with its fender flares and a long bed. As with the front, the rear is attractive if a little ordinary. Like the front, the rear features those rubber strips on the bumper also. The interior in typical Toyota fashion prioritizes function over form, meaning it is utilitarian, but it looks sturdy and substantial. Inside and out, the Hilux is a handsome truck, and it looks rugged without being macho. Styling wise, the Hilux is my choice over the Tacoma. 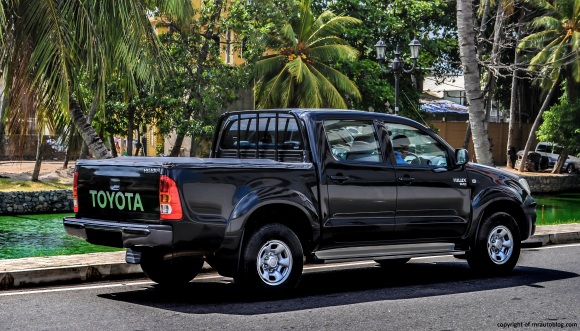 Even though this Hilux is a Toyota, don’t go thinking that it handles like a Corolla or a Camry. It is unashamedly a truck in its handling behavior as its handling is sound but not exceptional. I did not have a chance to explore its handling limits, but as for driving in the city, it does the job. The steering is light enough, and it displays some precision so that driving in town is not a chore. However, the steering lacks feedback, and you are unable to determine exactly where the front tires are. In a country where driving rules are rarely enforced, and cars are constantly cutting in front of you, the Hilux actually feels nimble. When you need to suddenly change direction, the Hilux feels light on its feet, and it brakes surprisingly well. The brake pedal feels mushy at first, but it feels direct enough. As for the ride quality, it strikes a decent balance. There is an underlying firmness, but it never becomes uncomfortable on normal roads. Only on the worst roads, it becomes unsettled, but even then it is not bad. Where the Hilux really excels is in go-anywhere ability. I have been told that this truck is superb when tackling the terrain in the tropical rain forests, especially with its low and high range lever.

One of the reasons that I wanted to review this truck was to see what a truck with a diesel and a manual transmission felt like. After all, this combination is practically unheard of in a non heavy duty truck in America. The 2.5 liter diesel produces 144 horsepower and 253 lbs of torque. While that seems very slow, especially considering that the Toyota Tacoma has a 236 horsepower V6, it is very flexible. It pulls easily from low revs, and the power delivery is linear. However, it is not that quick, so people expecting performance similar to American trucks may be disappointed. The five speed manual transmission is not one of the best I have experienced, but it is not the worst either. It has long throws, but it shifts into gear easily. There is some vibration from the gearshifter and the clutch. The clutch has somewhat long travel, but it is easy to engage. It gives decent feedback, although that could be attributed to the vibrations coming from the diesel engine. 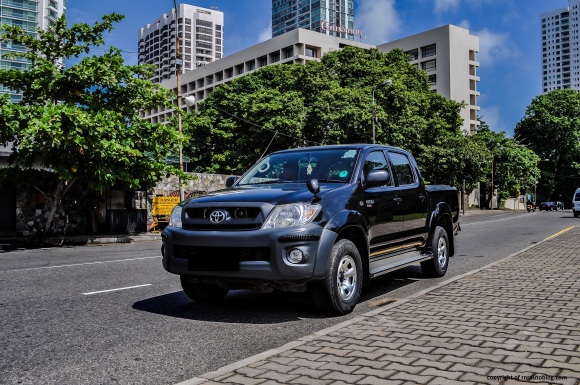 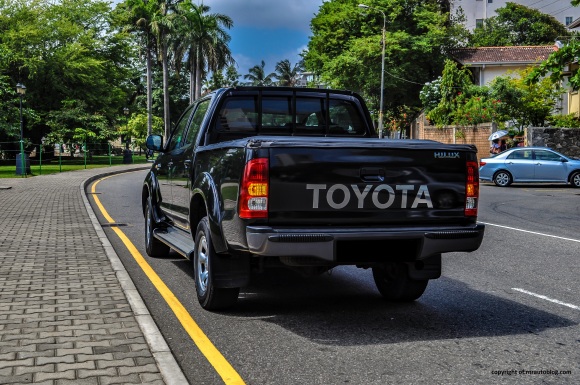 While the interior design may look boring, there is no denying that it displays typical Toyota fit and finish. There are hard surfaces, but the interior as a whole feels substantial and well built. Even though the steering lacks adjustment, it is easy to find a good driving position. The cloth seats provide good support, and the cabin feels airy with abundant headroom. There is decent legroom in the front, and the rear seat is roomy enough for three adults to sit comfortably. Visibility is decent in front and back, and the bed is a useful size. The cover is a  nuisance to take off because you have to unbutton numerous latches. The radio and air conditioning systems are a breeze to operate. My only complaint is that the power button for the radio is a long reach from the driver. The gauges are simple as well, although I would have preferred the speeds in the speedometer to be better labeled. There is a 20 km/h gap between the speeds, and it is hard to see if you are going 30 km/h or 35 km/h. Cabin storage is great as there is always a place where you can store items in. The cubbies below the vents are a useful touch, and the center console is big.

One thing I do know for sure, the Hilux is not one of the fastest, luxurious, stylish, or best driving truck out there. But what I do know that it is unbelievably reliable and capable. In fact, it is known as the “The Indestructible Truck”. The motoring show Top Gear  proved this fact by subjecting high mileage Hiluxes to torture tests only to be amazed that they still remain reliable at the end.  Even though the Tacoma is faster and more macho, I can see why the Hilux is favored internationally, especially in Asia and Australia. By not placing emphasis on materialistic qualities, Toyota focused on refining the core traits of a truck in the Hilux. The result is an honest truck that is unlike any other different truck I have ever driven. Lately all the modern trucks nowadays seem to be engineered not just to the average truck buyer, but to different audiences as well which is why the Hilux is a refreshing change of pace. By not focusing on the way it looks or how fast it goes, or how modern it is, I can just focus on the truck itself, and truly appreciate it.