Fun fact: The original Mercedes SLK was the first production luxury convertible to feature a folding hardtop. This novel feature enabled the SLK to look like a coupe with the top up, and a roadster with the top down, while also providing extra comfort and security that other cloth top convertibles could not match.  It was a success, selling around 55,000 worldwide in its first year (expensive convertibles do not usually sell this well). However, the original SLK garnered a reputation as a chick car, as it did not provide the driving experience its looks suggested. The second generation SLK in 2005-2011 sacrificed the previous SLK’s smooth lines for a more racier design. Even though handling was improved considerably, its image as a chick car remained, and its handling was still far off the pace of a Porsche Boxster. The latest SLK retains the retractable hardtop while promising better performance than the last two SLKs.

The SLKs have always been styled to resemble the pricier and larger SL convertibles. This third generation SLK is no exception. The lights and detailing are reminiscent of the SL. However, that is where the differences end. Proportions are classic rear wheel drive with a long hood and a short rear overhang. In my opinion, the front is a bit too fussy. The grille protrudes too much, and the headlights are an awkward shape. The side profile is shapely with a upward swoop towards the end although it could do without the nonfunctional vent. The roof nicely blends in with the overall shape. The rear is attractive and clean. The interior is typical Mercedes Benz. There are numerous neat touches such as the circular air vents, and the gauges are attractive too. The use of wood is questionable, especially in a sports car. 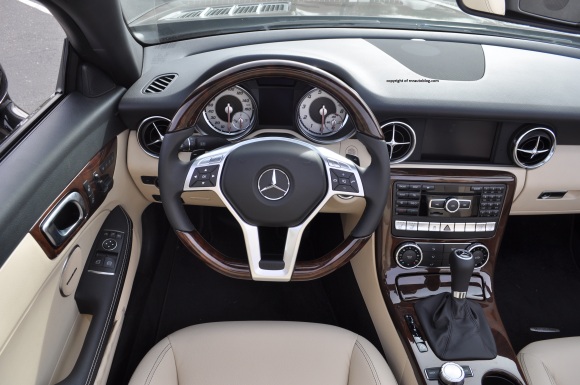 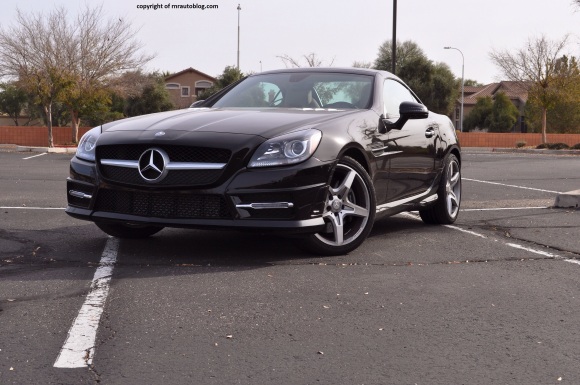 To be honest, I did not expect the SLK to handle well. I was pleasantly surprised. The steering has a satisfying weight to it, and with a flick of the wheel, the car reacts with alarming accuracy and precision. The only glaring omission is the lack of feedback. What really surprised me was the car’s attitude towards cornering. Delve into a corner, and the car feels wonderfully light. It feels like there is no weight over the front axle. The SLK could be described as a willing and eager machine aided by tenacious grip. Turn the stability control off, and the car remains controllable. Braking is excellent. Ride quality, a typical Mercedes Benz virtue, is good for a sports car. It is nicely controlled, and remains composed. Because this car was designed to be a convertible in the first place, body shake and quivering is non existent. Again, it is a very composed machine.

Before driving this car, I felt that the 201 horsepower 1.8 liter turbocharged four cylinder was too little for a car like this. Again, I was pleasantly surprised. There is a little bit of turbo lag at low revs, but go beyond, and this little engine really comes into its own. There is a colossal surge of power, and you just feel like it can keep charging up the mountain. It is a strong engine, and it feels faster than you would think. The 7-speed automatic transmission shifts effortlessly. The manual shift operation works decently. However, as good as the automatic transmission is, one thought that kept lingering through my mind, was how badly this SLK needs a manual. I understand that there is a manual available on the SLK250, and that a very low percentage of SLK buyers would actually get it. This is a sports car, and a manual transmission would be more fitting with its sporty image. The fact that it actually handles like a sports car gives all the more reason to get the manual transmission.

Refinement with the roof up is excellent. Quietness is a virtue of this Mercedes Benz. With the top down, refinement is actually tolerable. The raked windshield ensures that air flows over your head, making the cabin seem quieter than you would think. However, the engine note is very subdued, with only a whir being audible. 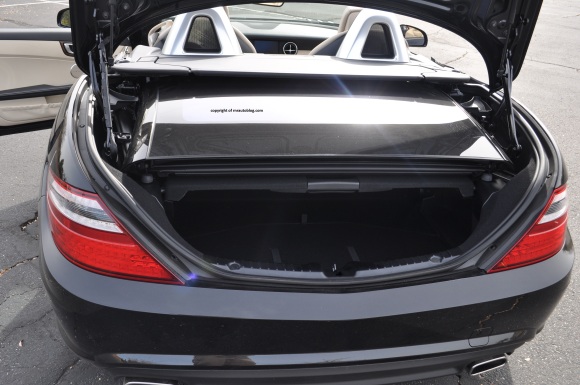 Except for the some brittle switchgear, the fit and finish is hard to fault. It is very easy to get comfortable as the seats can be adjust in numerous ways, and there is decent headroom. The seats itself are satisfactory, and still have enough lateral support for when you want to go on that fast twisty road. The navigation is confusing as it takes too many buttons to get to the desired function. There are some controls that are illogically placed, such as the switch for the convertible top. I expected it to be in the front, where it would be easy to see, but instead it was placed in front of the cup holders. Trunk space is adequate with the roof up, but cramped when it is down. My favorite interior feature is the Airscarf. It is an ingenious feature. There is a vent in the headrest, and it allows hot air to warm your neck in cold weather. 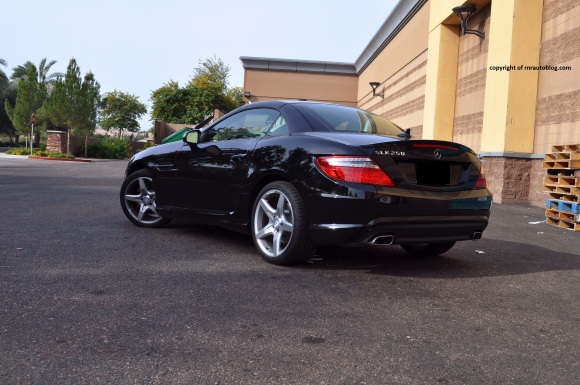 To sum up, this SLK makes a convincing impression as a sports car. It has the handling, and if you go for the faster SLK350 or the SLK55 AMG, the power too. If you want to get the most involvement out of this car, a manual transmission is a must. Did you know that in America, the SLK250 is the only model in Mercedes Benz’s lineup that can be bought with a manual? Over the years, Mercedes Benz has changed. They have stopped trying to be luxurious and comfortable, and they are trying to be more “sporty”. This is reflected in the performance and the styling. While the performance is spot on, the styling is not. Mercedes Benz vehicles have always been styled elegantly. Now, their cars’ designs are choppy, and not as stately as you would expect of the brand. The latest proof of this are the Mercedes CLA and the SL, which are awkwardly styled, uncomfortable, and the driving experience lackluster.  All this just to beat BMW in sales. Patience is a virtue. 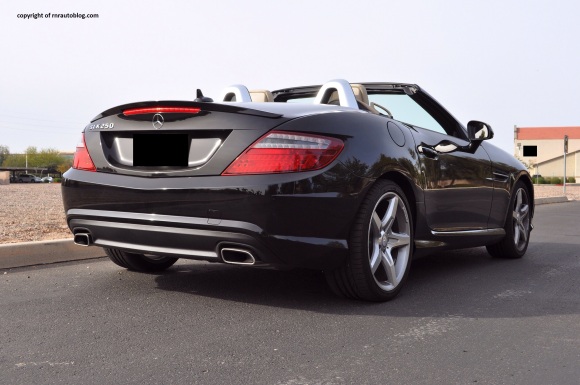