GMC (General Trucks and Coach Division)  was created in early 1900s. It became a separate division of General Motors that was committed to building commercial trucks. Over time, GMC’s lineup stayed in the commercial market, but gradually moved towards rebadging engineering. Rebadging is where auto manufacturers take the same car and rebadge it as something else. For example, the GMC Sierra is a rebadged version of the Chevrolet Silverado. GMC traditionally has always been the less mainstream version of Chevrolet SUVs and trucks. Its Yukon and Jimmy were rebadged versions of the Tahoe and Blazer, yet cost more. In the late 1990s and early 2000s, America experienced a SUV boom. The SUV completely over took the traditional wagon to be the new family car of choice. Americans swayed by the high driving position and image flocked to SUVs. All the automakers scrambled to produce a family friendly SUV in order to get a slice of this emerging market. The GMC Envoy was GM’s end result. Replacing the Jimmy, the Envoy was a rebadged version of the Chevrolet Trailblazer, as well as the Buick Rainier, Oldsmobile Bravada, Isuzu Ascender, and Saab 9-4X. The GMC Envoy was replaced by the Arcadia in 2009. 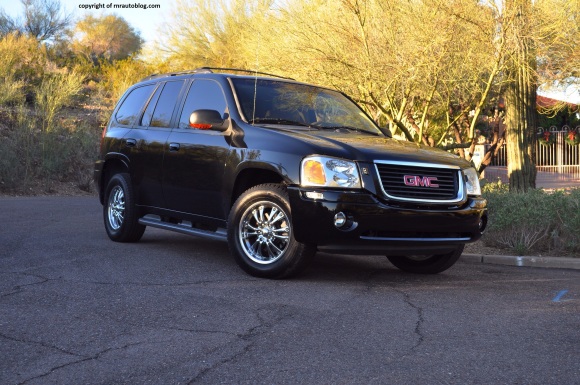 This is a truck based SUV, which can be reflected in its design. Up front, large headlights and a prominence grille with the bright red GMC embossed on it suggests masculinity. Subtle fender flares (subtle in this Oynx Black color) hint at its aggressiveness. GMC attempted to be unique when designing the rear, but ultimately they failed. The rear taillights look out of place, and confusingly the reverse lights are in the bumper. The rear could have been designed better, but overall it is a clean if somewhat ordinary design. The interior goes back to GM’s old days when they did cost-cutting, especially in the interior. The interior is uninspired, and looks plain with unconvincing wood. Except for the interior, GMC did a good job differentiating the Envoy from its rebadged stablemates in the design. 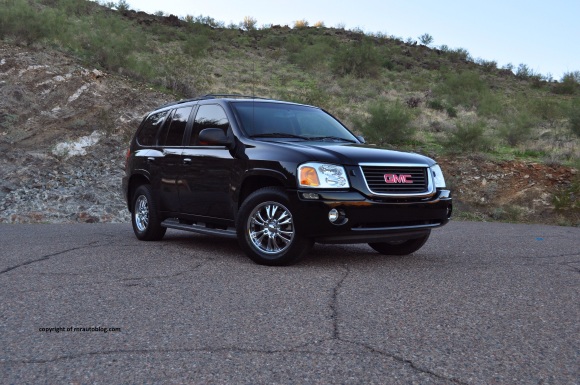 Handling is not the Envoy’s forte. It handles adequately in normal driving, but it falters in anything else.The soft suspension means it suffers from excessive body lean. Turn into a corner, and your confidence is immediately diminished in the Envoy’s cornering abilities. The steering is light at low speeds, but becomes imprecise at higher speeds. The steering is also vague. However, the soft suspension ensures a decent ride quality. However, hit rough surfaces, and the ride quality becomes jarring. Because it is based off the chassis of a truck, it feels very rock solid. There is some axle hop, which is typical of body on frame vehicles, but there is a solidity that unibody SUVs (Honda Pilot, Toyota Highlander, etc) cannot match.

Unlike most SUVs, this employs an inline six cylinder engine good for 275 horsepower. It is sluggish at low speeds, but floor it and it really pulls. Go on an incline, and it starts to strain a bit. The four speed automatic transmission shifts smoothly, but it is slow to downshift. Fuel economy is similar to that of a GMC Yukon (13-14 mpg) at 15 mpg, which is not great for a midsize SUV. 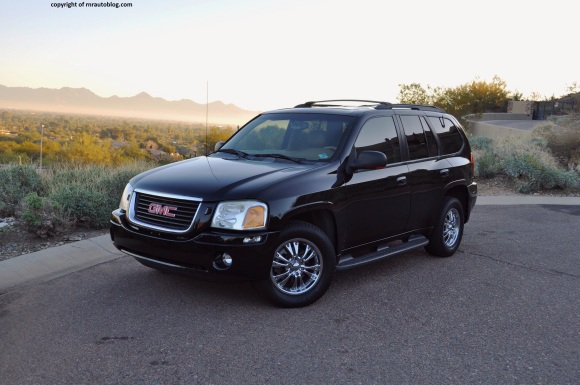 Road noise is subdued, but wind noise is present. Flooring the engine incites an agricultural engine note. It also grumbles at idle. Overall, the noise levels are tolerable. 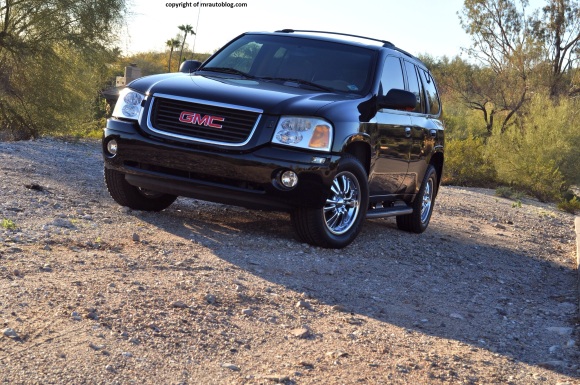 One of the reasons GM went into its downfall was because of the fit and finish in its vehicles. The Envoy is no exception. The controls feel brittle to the touch, and there is hard plastic abound. There are several panel mishaps. The controls are intuitive, and logically placed. The seats are comfortable, and the second row is roomy. The third row might be a bit tight for some. The cargo area is large, but access is restricted due to the high bumper. One feature that I do not like are the seat mounted seat belts. I find them very uncomfortable. Visibility is decent.

Before General Motors went into bankruptcy, their cars were not very well designed, and they mostly sold on the basis of American nationalism. The Envoy is an acceptable SUV, but it faces competition from compelling SUVs such as the Honda Pilot or Toyota Highlander. It does have a decent engine, and somewhat adventurous styling, but it falls weak in some areas such as build quality, and handling. The good news is that General Motors saw the bankruptcy as a wake up call, and they became determined to produce better quality cars. The latest Chevrolet Cruze, Chevrolet Impala, Buick Lacrosse, the new Cadillacs, etc. are examples. GMC looked back on the Envoy, and produced a drastically better vehicle, the Arcadia. An important life lesson can be learned here. If you do not learn from your mistakes, you cannot move forward. 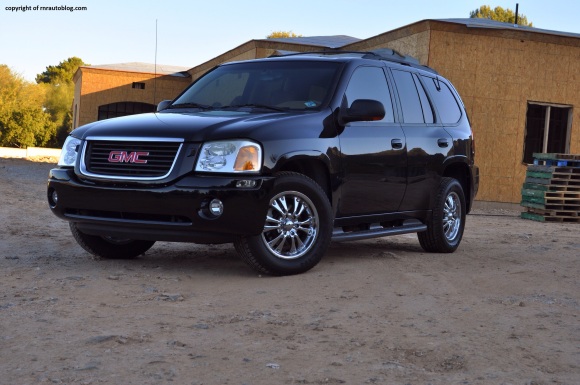