A few years ago, the luxury car sector was shaken up by the introduction of Mercedes Benz’s CLS. It gave meaning to the body type “four door coupe” as it boasted a sloping roof line and sharper looks. The success of the CLS has attracted the attention of BMW and Audi. BMW struck back with its 2012 6 Series Gran Coupe and Audi did so with its 2012 A7. Based off the Audi A6, the A7 flaunted sharper styling as well as higher prices. Much to Mercedes Benz’s chagrin, the Audi A7 achieved success. It was Automobile‘s “2012 Automobile of the Year”, International Car of the Year in 2012, AutoWeek’s Best of the Best/Car for 2012, and Esquire’s 2011 Esquire Car of the Year. Competing with rivals from Mercedes Benz and BMW, the A7 incorporates typical Audi virtues while giving prospective buyers an attractive alternative to the Audi A6.

When the A7 debuted, initially I was not a fan of the styling. I deemed it to be uninteresting and mundane. But the A7’s looks have grown on me. Look at the A7 head on, and you will notice how stately and well defined it appears to be. The headlights are slightly recessed, creating a razor sharp effect with the benefit of attractive LEDs. Audi’s corporate grille is integrated well within the front fascia. Again, as with Audi vehicles, the lower aspect of the front bumper is too fussy, but it does not detract from the overall design. The side profile is clean, with discreet character lines and fender flares. The roofline is slanted sharply and the window line is crisp. The roofline makes way to the tapered rear. The taillights are distinctive, and the rear diffuser has nice detail. I like how the rear looks like it is a singular piece not broken up by unnecessary lines or creases. Even though it is derived from the A6, the A7 looks nothing like the A6. The interior features an inviting blend of colors, and they help lift the mood of the interior. The wood accentuates the interior nicely, and all the textures flow together smoothly. The pop out navigation screen looks little bit like an aftermarket item though. 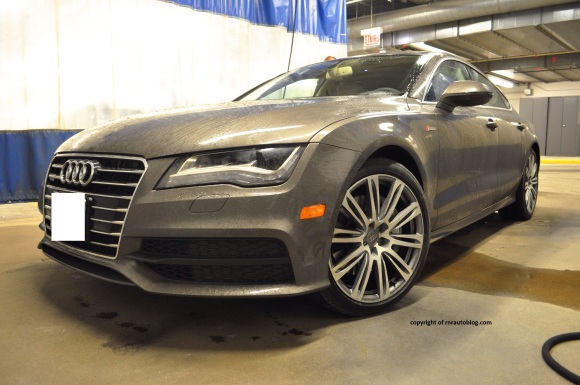 To drive, the A7 is pleasant. Handling is secure with restrained body control (even more restrained in Sport Mode) and decent grip. However, the steering is too light and vague to deliver an engaging driving experience. I drove this in snow, and the Quattro system worked wonders. It was able to deliver ample traction, while able to give the impression that the A7 is balanced with mild understeer. The ride quality is decent. In comfort mode, the suspension does an exceptional job at silencing bumps. But put it in any mode other than Comfort, and the ride quality becomes typical Audi: jittery. Braking performance is excellent.

Aside from the styling, the engine is possibly the best feature of this car. It proves that you do not need a big engine in order to have power. Rated at 310 horsepower, the supercharged 3.0 liter V6 delivers effortless and linear power. Floor the gas pedal, and there is an enormous surge of power. It is accompanied by an eight speed automatic transmission. It shifts smoothly, and the manumatic function works well.

Refinement is impressive except for some wind roar. The doors are frameless which I love, but they let in unwanted noise. 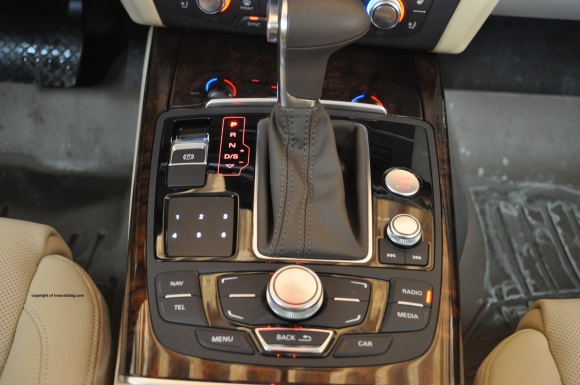 As always with Audi’s cars, the interior is beautifully finished. Everywhere you touch, you can’t stop but admire and “ooh” and “ahh” at how everything feels so luxurious. The seats are sumptuous, and I can guarantee that you will be comfortable on a long road trip. The controls are both easy and complex. The AC controls are not integrated with the MMI system (navigation) and they are easy to decipher. However, the radio and several functions are integrated with the navigation, and navigating functions such as entering destination is a chore. The controls for the MMI system are also inconveniently located behind the transmission lever. Fortunately, the radio function is easy enough to master. The touch pad works well, but it can be a waste of time if you are in a hurry. Visibility is acceptable in the front, but thick pillars obscure the rear visibility. Unfortunately, the rear only seats two, not three. There is enough legroom to satisfy most people, but headroom is severely compromised due to the sloping roofline. Trunk space is more than adequate, aided by the hatchback liftgate.

To sum up, the A7 is stylish, functional, and comfortable.  Whereas the A6 is the sensible choice, I consider the A7 the fun choice while retaining most of the positive attributes of the former. There isn’t a palpable reason for why, but it really feels more like its own car and not a derivative of the A6. With that said, the A7 is an impressive car. As with the Audi A4 that I reviewed earlier, the best thing that I like about the A7 is how it is not as flashy as the aforementioned CLS and 6 Series Gran Coupe. It is a luxury car, but it does not call attention to it, and that appeals to me. I was able to focus on the car itself, and I came across a very compelling package.