As the SUV market was  booming in the 1990s, Mercedes-Benz was in need of an SUV. Launched in 1998, the M-Class was one of the first cars to be manufactured at Mercedes-Benz’s then new plant in Tuscaloosa, Alabama.  It won several awards such as Motor Trend‘s Truck of the Year for 1998, and the World Car Award in 1999. Despite the acclaim, the M-Class was criticized for its poor reliability issues. I remember reading about how when it rained, the water would leak through the sunroof of these SUVs.  Mercedes-Benz attempted to rectify these flaws with the 2002 facelift. The V8 in the ML430 version was replaced by a 5.0 liter V8 and thus necessitated a name change to ML500.

Design wise, the ML500 is upscale. Even though this is the Sport version, I like how they did not overdo it with the simple mesh grille and bumper design. The jewel headlights complement the grille well. One little Mercedes-Benz detail that I like is that the logo on the grille is see through. On the latest models, the logo is not, and looks like a cheap plastic button. The bulging fenders give it a truck-like appearance but the overall shape is still feminine. The blacked out pillars is a nice touch, and it gives a wrap around look to the rear. The taillights are pleasant as is the overall rear. It may not be a stunner, but it is miles better than the pre-facelift M-Class. The interior is business like in decor but overall it is upscale. In my opinion, despite it being ten years old, it does not look that dated as one would think. It still looks classy and elegant. 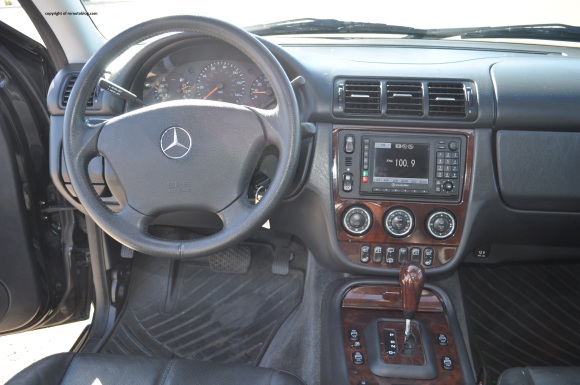 On the drive, it became apparent that handling is not one of its best attributes. It is secure enough, but overall it is clumsy. Its soft suspension means that it lumbers in corners, and it dives dramatically during braking. The steering is light, but it has little feedback. It can be slow to respond at times. It runs out of grip early as well.  The soft suspension also means it gets jostled easily by big bumps or dips. The ride is compliant for the most part. On the highway, it is smooth. Braking is average, and the brake pedal can feel mushy.

The reason I wanted to review this car was because I wanted to see what an old school Mercedes-Benz V8 engine was like. In 2014, a V8 with no turbocharging or direct injection or any fuel efficiency oriented technology is considered old school. It makes 288 horsepower. The 5.0 liter V8 is strong off the line, but the power band tapers off at high revs. 2,000-4,000 rpm is the V8’s sweet spot. Tap the pedal, and it’ll pick up speed. The five speed automatic transmission is mostly smooth. It hangs on to revs for too long. One time, I was at 4,000 rpm, I expected it to upshift and I took my foot off the gas pedal, and then I depressed it again. The ML500 jerked because it still hasn’t upshifted. Did you know a manual transmission of this was available in Europe? I thought that was interesting. According to the owner, the problem with this engine is that it drinks. That is not surprising considering the official EPA date lists the fuel economy at 13 city/16 highway/14 combined (in mpg).

Refinement is decent. It is hushed and quiet except for some road noise. The engine groans a bit at low revs but then it transcends into a well cultured growl.

Fit and finish is good although some plastics feel cheap to the touch, and the buttons feel flimsy. The dash is plush though. The gauges are easy to read. Except for the radio and navigation, the controls are simple. The navigation unit incorporates radio, and you have to rely on small buttons that are a far reach from the driver in order to change the station. The navigation interface is tedious as you have to press numerous buttons in order to get to a desired function. If you want to insert a CD, you have to press a button and then wait for it to open, and then insert it. The placement on the window switches and the mirror adjustments on the center console are unconventional, but easy to get used to. Headroom is abundant, and there is a commanding view of the road from the front seats. The leather seats are comfortable enough, but they are slippery, especially in turns. The rear seating is roomy enough for three adults. The third row is reserved for kids. Legroom is lacking, and there is no toe room. The cargo area is adequate, but the third row robs a great deal of space, and it cannot be stowed into a flat floor. You have to remove them. Visibility is excellent. 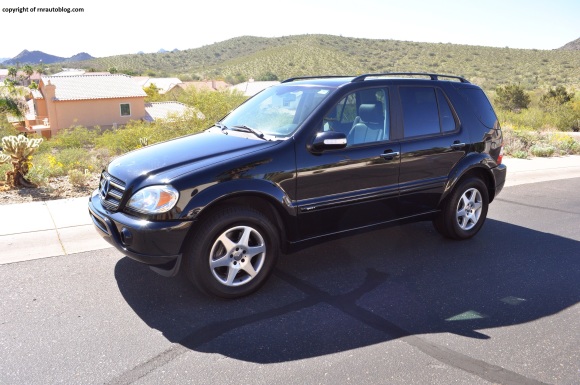 Despite all the flaws, there is something about an old school Mercedes-Benz. Granted this is not considered an “old” Mercedes-Benz, but there is something that makes it feel like a classic. It has the simple and elegant styling that Mercedes-Benz used to do, the powerful V8, the gauges where engine speed is labeled by tens not ones (I just liked this feature), and other details. Sure it has poor gas mileage, and the handling is not the best, but it feels human. It is a far cry from the latest Mercedes-Benz which are so aloof they basically are semi autonomous (The S-Class is actually semi autonomous). It feels like a proper Mercedes-Benz.