Launched in 1989, Nissan’s luxury division, Infiniti, attempted to rival BMW, Mercedes-Benz, and Audi, as well as competing with other Japanese luxury manufacturers such as Lexus and Acura. As one of Infiniti’s first two models, the Q45, inspired by the term “Q-Car”, meant to be a high performance car without the high performance looks. As such, the Q45 focused heavily on power and handling. It met rave reviews relating to its superb handling and fast acceleration. However, sales did not really take off due to the unconventional looks and a poor advertising campaign. Redesigned in 1997, the second generation focused more on luxury and comfort this time with reduced acceleration and handling abilities. Despite the effort, the Q45 faltered in sales behind its main rival, the successful Lexus LS. The Q45 was again redesigned in 2002, this time, the Q45 combined sharp styling with the performance of the first generation with the luxury of the second generation. 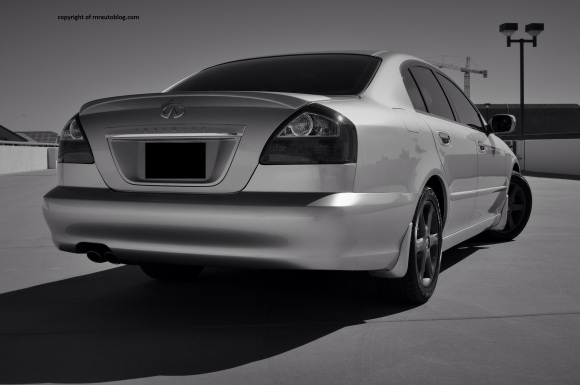 Compared to the previous awkwardly styled Q45s, this Q45’s design conveys sharpness and some essence of prestige. Up front, the tasteful grille and detailed headlights reveal an executive appearance. The headlights are the best part about the design as they resemble a Gatling gun. The side profile with its taut body and upright roofline give off a sporty feel. The spoiler nicely tops the chiseled rear although the banal taillights mar the appearance. To sum up, the Q45’s design is aggressive and purposeful. Although decidedly businesslike, the interior is well furnished by wood trim, and the analog clock is a classy touch.

Infiniti touts the Q45 as a sports sedan, claiming that the Q45 drives like a car half its size. Sadly, that is not the case. You never really forget the bulk of this when you are turning. With moderate lean and numb steering, the Q45 fails to match a BMW 7 Series for engaging handling.What it does prevail in is its competence. Despite its average body control, it clings to corners well, and it feels remarkably balanced for such a large car with light and quick steering. The ride quality is a mixed bag. The soft set up means it floats over smooth roads well, but road imperfections permeate through the cabin on subpar roads. It is not as rigid as it should be, although I suspect this is due to the car’s age. Braking is excellent.

However, when Infiniti claimed the Q45 to be a sports sedan in performance, the claim turned out to be true. The sole powertrain combination is a 4.5 liter V8 engine mated to a five speed automatic transmission. Supplying 340 horsepower, the V8 provides effortless acceleration. The V8 feels strong at any revs, especially past 3,000 rpm.With 333 lbs of torque on tap, you are never left wanting for more power. However, the five speed automatic is poorly calibrated. Tap the gas pedal at a stop, and the car will literally grind for a second before moving. It hangs on to gears for too long, and gear changes are abrupt.

Refinement is befitting for a luxury sedan. It is hushed with no traces of wind or road noise present. The engine remains refined during normal driving. But punch it, and the engine note transcends into a sonorous growl. 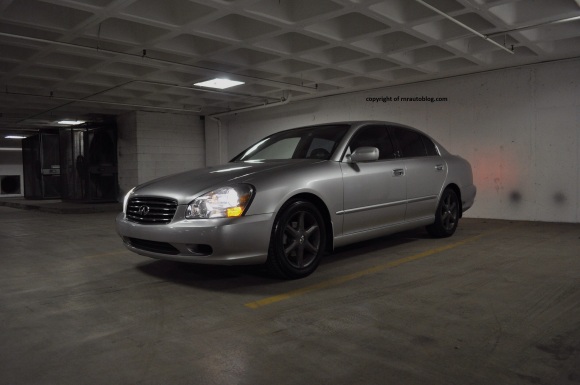 Aside from some cheap touches, the interior feels worthy of the Q45’s then $50,000 price tag. Plush leather and well assembled controls lend a feeling of opulence to the cabin. The front seats offer excellent support for the driver and passenger. Aside from the steering wheel that does not tilt far enough, finding a suitable driving position is easy. Thanks to the upright roofline, the cabin permits enough headroom to suit tall adults as well as enough legroom. The spacious rear can seat three adults in comfort. The roofline and wide opening doors aid access. Infiniti tried to pursue a “technologically innovative” theme with the controls and displays, but in reality it just made the controls complex. Take the AC for instance. You have to press AUTO just to change the fan speed, but it does not stop there. It gets even more confusing due to the lack of dedicated buttons for the AC system in which you use the number keys. Thankfully, the radio controls are intuitive although the radio buttons are a long reach from the driver. The gauges are logically laid out. Visibility is decent although the thick rear pillars can impede your over the shoulder vision. 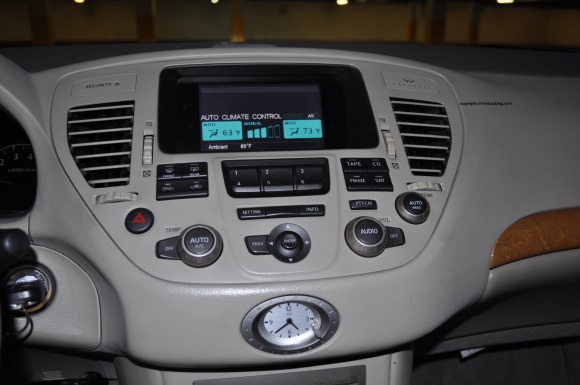 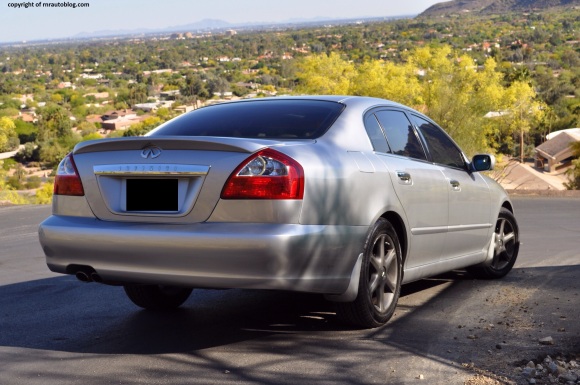 In Fast and Furious: Tokyo Drift, the Yakuza  (Japanese version of the Mafia) makes a prominent role in the film. The reason I bring this up is because the Infiniti Q45 is very Japanese in terms of styling and performance. Whereas at the time, its rivals, the Lexus LS430 and the Acura RL were very Americanized, this Q45 stood out with its unique personality. The whole time I was driving this car, I had a childish feeling. I felt like the Yakuza in this car (in a good way). Even though it may not seem like it, the Q45 exudes a certain cool factor unmatched by its rivals. Combine that with the sharp styling and sports car performance, and the feeling you get from this car cannot be measured. Just like infinity.