In the 1990s, the Acura Integra fulfilled the role as Acura’s entry level sedan. With its blend of good reliability, handling, and fuel efficiency, the Integra was a success. It soldiered on to the 2000s before being replaced by the TSX. With the demise of the four door Integra in Acura’s lineup, Honda’s luxury division, Acura saw fit to introduce the TSX  (Touring Sportscar eXperimental) in 2004. What most people don’t know is that the TSX is actually sold as the Honda Accord in other countries. In Europe, the TSX is sold as the Accord and is marketed as Honda’s family sedan instead of the much larger model we get in America.  Acura positioned the TSX as a cheaper and sportier alternative to the bigger and pricier TL. Even though I favor the TL, I have always liked the TSX. The 2004-2008 TL is my realistic dream car (by realistic, I mean affordable and non exotic), but I usually favor smaller cars, so I was keen to see if I would like the TSX better than the TL, especially if it delivered in the driving dynamics department. 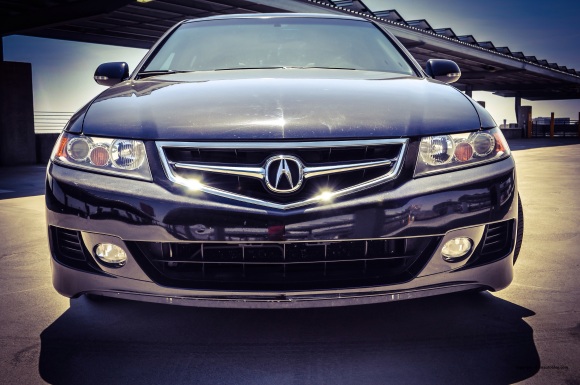 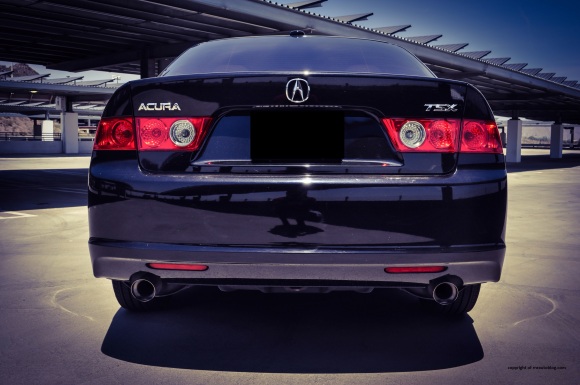 The front features a tasteful chrome grille, and slim and modern headlights, and the fog lights are nicely incorporated into the lower air dam (bumper). The athletic side profile hints at the TSX’s sporting credentials, and the chrome lined window line gives it a touch of elegance. The rear is one of the best aspects of the design. The taillights are similar to the headlights in shape, and they are attractive. The interior is an inviting place to sit in. The wood trim is real, and looks real, and meshes well with the tan color. What I love about the TSX is that it is a luxury car, but it is not pretentious or over the top inside and out, and it is simple which is why it has aged well over the years. 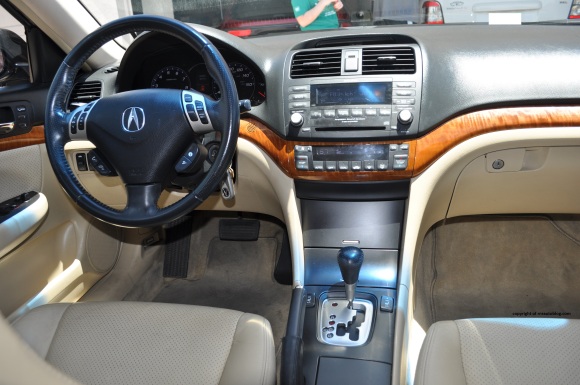 Apart from the styling, the driving experience also hints that this car caters to European tastes. The steering has some resistance to it, but you get the feeling that the steering wheel is actually connected to the wheels which is ensured by the precision and accuracy the steering offers. In true Acura/Honda form, the steering relays subtle vibrations of the road, giving you a better understanding of what the front wheels are doing. We were in a empty parking structure, so I asked the owner if I could “explore” the handling limits of this car. After fifteen minutes of tire squealing and dodging concrete pillars, I was not disappointed in its handling. It is very balanced, and despite its front wheel drive layout, it does not plow straight ahead when pushed. Restrained body lean and decent tire grip aid its handling capabilities. This is a truly enjoyable car to drive. People who are looking for a Buick level type of ride quality may have to look somewhere else. You feel the bumps, although they are not intrusive. The way I see it, the ride is another way the car is communicating with the driver. 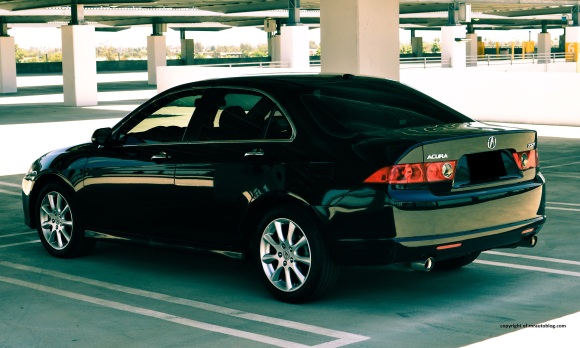 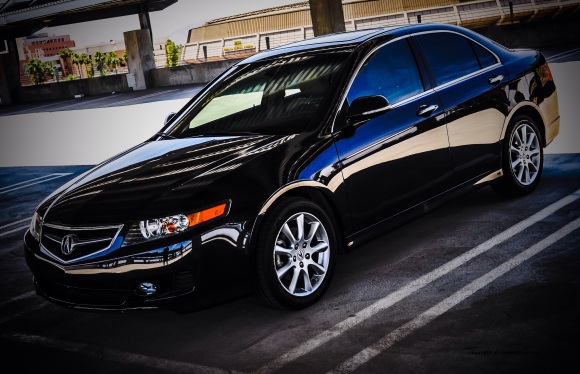 Shared with the 7th generation Honda Accord (non European), CRV, and Element, a 2.4 liter inline four cylinder engine was the only engine available for this TSX. This engine is one of Honda’s finest because it is a gem. It revs willingly to its 7,000 redline in a linear manner, and despite its 205 horsepower rating, it never feels weak at any speed. Although it can feel flat at low revs, there is enough power so that keeping up with traffic does not become a problem. A five speed automatic transmission aids the four cylinder’s performance. Even though the automatic does its job well, I still could not escape the feeling that the optional six speed manual transmission would had been a better fit with this car. At 20 mpg city and 28 mpg highway, the TSX is fairly fuel efficient. 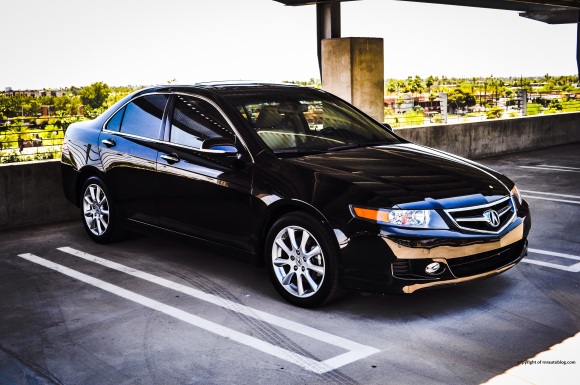 Acuras receive criticism for letting in too much road noise, and the TSX is no exception. The tires slap on just about every surface, and it worsens when the road conditions deteriorate. However, there is no wind roar, and the engine wails to its redline harmonically.

The cabin feels high quality and worthy of the price. All of the buttons and controls have a substantial feel to them, and soft touch panels adorn the cabin. Most people will be comfortable in the front seats, although they can feel a bit too firm for some. Headroom is problematic for some tall drivers, especially with the sunroof. The seats offer enough settings to ensure you sit comfortably, and the tilt and telescoping steering wheel is a bonus. Visibility is excellent thanks to the slender pillars and large windows. Steering wheel controls are a boon, and you can operate them without looking. Same goes for the controls. The rear seat is roomy enough, but anybody used to America’s big sedans will find the TSX relatively confining. Legroom is on the short side as well, and the trunk is just adequate.

Growing up around Hondas around my life, I have always been inclined towards Hondas and Acuras. The TSX is proof of the brilliance that Honda/Acura is known for. Even though they are not what they used to be, there is no denying that they made great cars. And the first generation TSX is one of them. It reminds me of a puppy with its eager and involving nature. In this car, you are drawn to how simple it is, and in a good way. By simple I mean, it does not need fancy technology for you to appreciate how great it is. In the automotive industry, it is imperative for luxury/upscale cars to have a rear wheel drive layout in order to deliver decent handling and performance like BMW and Mercedes-Benz do. But this TSX with its Honda derived platform still shines with its front wheel drive layout. The 205 horsepower four cylinder means it is powerful enough for overtaking or merging, but it does not have so much power that it completely overwhelms the car. In fact, you have more fun pushing this engine to its limit because the fun lasts longer. Combine that with a stylish interior, great handling, great ergonomics, and you have a car that’s a winner. Sure it is rough around the edges, but its lively demeanor makes up for it. I still prefer the TL, but after getting out of the TSX, I could not wait to drive it again.