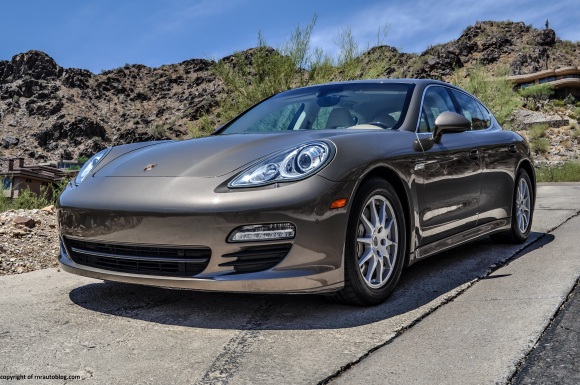 As a company known for making only sports cars, Porsche shocked the automotive industry when it introduced its first ever SUV, the Cayenne, in 2003. This move upset Porsche purists who believed that Porsche was selling out, and that it should stick to making sports cars only. However, money speaks for itself. The Porsche Cayenne was an instant success, and it quickly became Porsche’s best selling vehicle (still is). It makes sense. Consumers were ditching minivans and sedans for the SUV, and prioritize a high driving position and the SUV image. When you put the Porsche badge on the type of vehicle in demand, you get an instant success. After the Cayenne, Porsche wanted to expand its company. They came up with the idea of a performance sedan that would take on BMW and Mercedes-Benz. As usual, this incited rage from Porsche purists, and it did not help that an automatic transmission would be the only transmission available in the US. When the Panamera debuted in 2010, it was criticized for its styling. But it had the Porsche badge on a practical sedan. Like the Cayenne, it also became an instant success. I have always wanted to drive a Porsche Panamera ever since it came out just to see if it did drive like a Porsche. Fun fact about this car: this Panamera was the third model sold in America, and it was ordered a year before it was delivered. 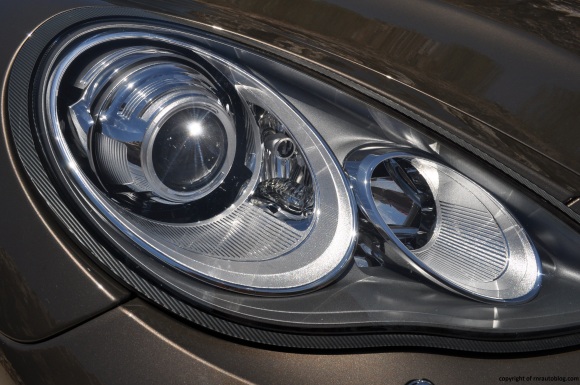 The main controversy surrounding the Panamera was its styling, or more specifically, the “hunch”. When I first saw the Panamera, I thought of The Hunchback of Notre Dame. I don’t know why, but I just did. Up front, the signature Porsche face remains. The bug eyes and the hood being lowered between the headlights are details taken from the 911 and Boxsters. Speaking of the headlights, they are fascinating in themselves as I cannot get over how detailed they are. The side profile is where things get interesting. The edge of the headlights creates a shoulder that extends to the taillights. In an attempt to keep the Panamera similar to the 911 in appearance, back is a hatch design. What perplexes me is that the taillights make it look like a sedan, but the hatch design indicate it is a hatchback. On hatchbacks, the taillights would normally rise with the hatch, but on this, they remain fixed like on a sedan trunk. The beltline makes a sudden kink towards the end, a boomerang-ish motion. As for the rear, it is odd looking, more so if you look at it from an angle. But over time, I got used to the styling, and I do have to admit that the Panamera does not look like anything else on the road. The interior looks like any other Porsche interior which is a good thing. There is a modern feel to it, and the wood trim meshes well with the tan interior. 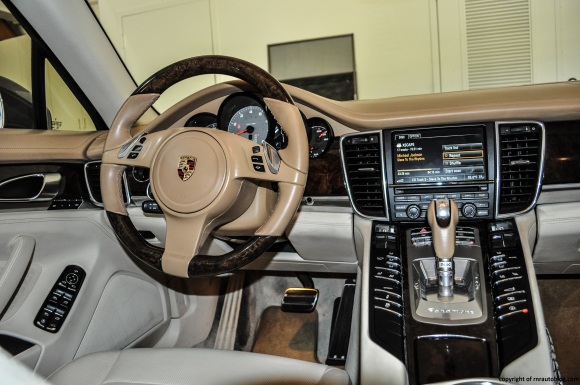 The Panamera certainly lives up to its Porsche name. On a route consisting of corners with sharp angles and roads with sudden elevation, it fared very well. With virtually no body lean and tires that seem to be glued to the ground, you could almost mistake it for a race car. I am just amazed at the way it sticks to the ground, even with this much horsepower. Usually, in a rear wheel drive car, this much horsepower would need little effort to break the rear tires loose, even with the stability control on. But somehow, the Panamera remains composed, putting down its power without fuss. It remains stable at its limits, and is unfazed by mid corner bumps and road imperfections. The communicative steering adds to the Panamera’s race car-like characteristics with its super quick response and slightly heavy weight at speed. This was in normal mode. In sport mode, it becomes a wholly different car. The shocks firm up, the steering becomes even more sharper, and the already touchy gas throttle becomes even more touchy. This Sport mode was too much for me to handle so I put it back in normal. As a whole, I feel that the car is a better driver than the actual person driving the car thanks to various technologies such as adaptive suspension and Porsche dynamic control. This might not make sense, but despite its impressive handling, it just feels slightly aloof. As for the ride quality, it continues to impress. The adaptive suspension works wonders here. It provides a firm but comfortable ride that stays supple on even the worst roads. The brakes provide excellent stopping performances, although they are sensitive and take time getting used to. 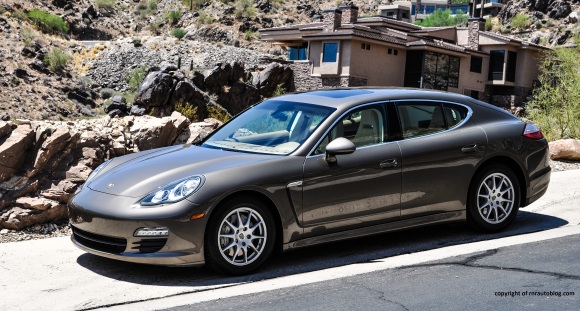 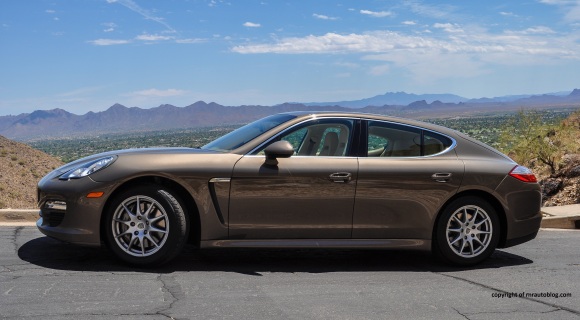 The cheapest Panamera comes with a 3.6 liter V6 good for 300 horsepower. Step up to the S, and you are treated to a 4.8 liter V8 with 400 horsepower. If the V6 is fast with 0-60 in around 5 seconds, imagine how fast the S is. It is unbelievably fast. Accelerating to 30 mph feels like accelerating to 60 mph, and every time you stomp the accelerator, you are pushed back into your seat. I’ll have to admit, this V8 is intimidating because the gas throttle is very touchy. Misjudge the amount of pressure you put on the accelerator, and you get surprised with an alarming urgency. The V8 has so much power, that it is easy to go fast without even noticing. The owner told me one time he was cruising on the highway, and all of sudden he noticed that he was at 100 mph. If you want even more power, the Turbo and Turbo S have 500 and 550 horsepower. The PDK 7 speed automatic transmission works well. Shifts are barely felt, and it is always quick to change gear.

The Panamera excels in the the refinement aspect. The interior is very quiet, although the V8 can be easily heard when above 3,000 rpm. It lets out a satisfying growl when floored. 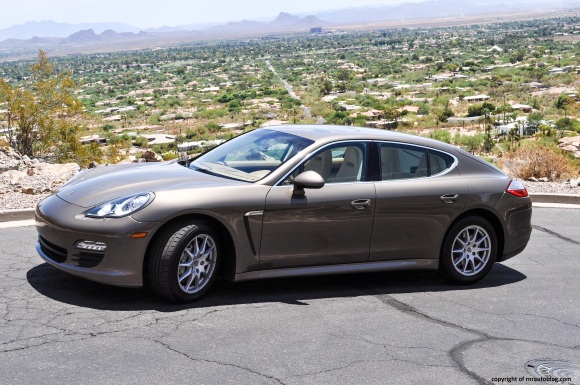 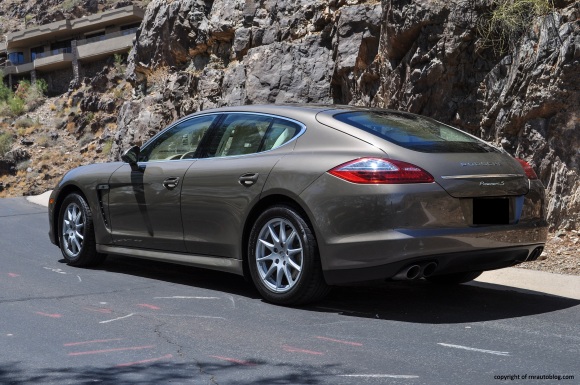 Typical of a Porsche, the cabin is flawlessly finished. With a tilt and telescoping steering wheel and eight way power seats with memory settings, finding a good driving position is not a problem. However, the high hood and the low windshield really affects your forward vision. I actually had to lean over the dash just so I could see in front of the car. Rear visibility is not that great either. The front seats are heavily bolstered which is great for in the corners, but it can feel confining. The seats feel too firm as I had to keep moving around the seat so that my butt wouldn’t fall asleep. Due to the low roof, access to the front is hindered, even more so in the back. Two adults can fit comfortably in the two rear seats, although taller passengers will not appreciate the lack of headroom. It can also feel claustrophobic inside due to its small windows and overall snug feel. Like Porsche’s sports cars, the gauges consist of a central tachometer with a small speedometer and other gauges. While it is a cool touch, I don’t see the point of the tachometer in the middle considering that this only comes with an automatic. The speedometer is not very well labeled but fortunately, there is a digital readout of your speed underneath the tachometer. As with other Porsches, the controls are an ocean of black buttons. Most are hard to read and illogically placed. I wish the AC buttons weren’t on the center console, forcing you to take your eyes off the road. The navigation interface is not the easiest to use because you have to go through multiple steps just to get to a desired function. The cargo area is a reasonable size, and the rear seats can be folded down to expand the space. 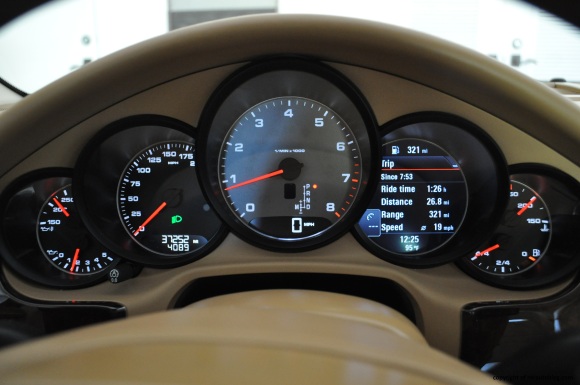 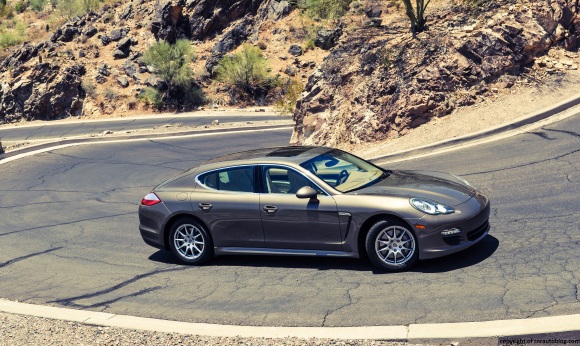 I have never seen a luxury sedan blend handling, performance, and luxury as successfully as this Panamera. Its cornering abilities would shame many sports cars, and with the 4.8 liter V8, it would have no problem keeping up with a pre-2013 BMW M3 in a drag race. Yet it manages to be as comfortable as a true luxury car, albeit with some caveats. In other words, if it had a manual transmission, it would be a true Porsche. However, as great as the Panamera is, I wouldn’t buy one. Maybe it is because I don’t have that much experience with fast cars, but the Panamera S is too much car for me. With its technology, it all feels very robotic which is a problem for me. It just feels automated in the sense that the car is using technologies to make it handle better than the driver could. While some people would like that, it is too technologically advanced for me. I could be old fashioned, but I believe a car is engaging only if the driver gets a piece of the action. Regardless, the Panamera is a fine car.