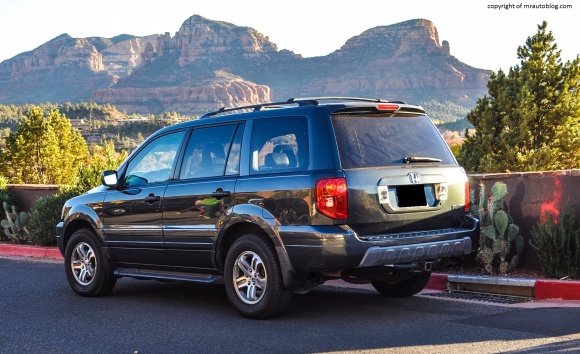 Neela is back! For those of you who don’t know, Neela is a 2004 Honda Pilot EX-L. She is also my first car which my sister now drives in college. I have not seen Neela for four months, and as Thanksgiving Break approached, I was increasingly becoming excited to eat pumpkin pie and to drive the Pilot again. When I got into the driver’s seat, it is so nice to be in such a familiar environment. I share a 2010 BMW 328i with my dad, but when I drove the Pilot in the last three years, I had a tendency to arrive at places early than expected. For example, I would get to school 30 minutes before it started, 15 minutes earlier than my friend said to come at, etc. While waiting in the car, to pass the time, I would read the Honda manual. Lame I know, but I now know everything that is to know about the Pilot whereas I am still getting used to learning about the controls and buttons in the BMW. For the first time in four months, I start up the car, and a smile forms on my face. I patted the dashboard, and I said, “Neela, I’ve missed you.” But let me tell you, I have been driving a small and light car for four months, so the difference in the handling is very obvious. The first five minutes, I couldn’t believe how light the steering was, and how much slower it was to respond than the BMW. But after 10 minutes, I was used to it already. Nothing has really changed. There are new scratches and dents here and there, and when I cleaned the car, I found an old Subway sandwich in the third row (thanks a lot sis), but the fundamentals remain the same. Friday after Thanksgiving, my sister and I took a couple of friends, and we went on a short road trip. Obviously, I insisted on driving there and back. We explored beautiful scenery, and the Pilot handled every hill and inclines well. Although with a full load on board, the Pilot was heavier than usual, especially on an incline, so I often had to push harder on the accelerator which put the transmission in the lowest gear possible. Because of this, the engine became very audible and everybody screamed at me for going too fast. Bummer. To sum up, it was a delight to be reunited with the old gal over break. By the way, she is almost a thousand miles away from reaching 170k, and she is still running strong. I took some impromptu pictures of Neela, so I hope you enjoy them.

One thought on “She’s baaack!”