Replacing the Stanza, the original Altima debuted in 1993. Its role was to provide more space, luxury, and power than the compact Sentra sedan but less than the Maxima sedan. The first two generations sold acceptably well, but did nothing to worry the Toyota Camry and Honda Accord. This changed with the third generation. In contrast to the previous generations’ tame styling and mundane handling, the 2002 Altima boasted sharp styling and prioritized nimble handling. With a 240 horsepower V6, the Altima had the power to match its looks, and in a time when competitors’ V6 maxed out at 200 horsepower, the Altima was fast. This Altima had the goods to worry Honda and Toyota. This approach continued with the fourth generation Altima. I’ve had the opportunity to drive a 2009 Nissan Altima 2.5 and 3.5. The 2.5 liter four cylinder provided great performance for a four cylinder,and the 3.5 liter V6 was very sporty and powerful. I really liked the fourth generation Altima, and the fact you could get it with a manual albeit hard to find was a bonus. In 2011, the Altima was the second best selling car in the US. Captivated by this growing success in sales, Nissan wanted to capitalize this. It took a different approach with the 2012 redesign of the Altima in order to garner even more sales by focusing more on comfort and space. 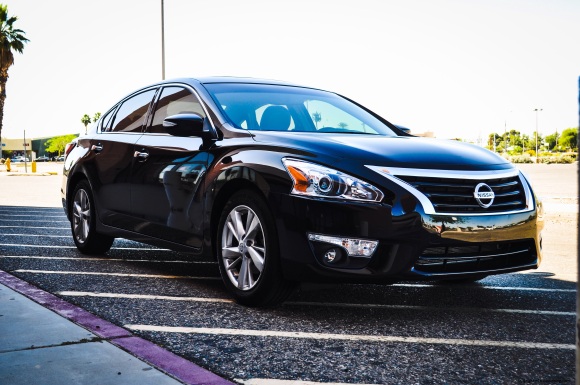 In 2012, Nissan went with a evolutionary look for the Altima. The overall shape is similar to previous Altimas, but instead of going for sportiness, Nissan prioritized an upmarket feel. The front end is the least cohesive aspect of the car. The awkward headlights look misaligned with the grille, while the grille itself looks “pinched” in the middle. The pleasing side profile starts with the bulging front fenders which make way into a sweeping character line that molds into the trunk. The taillights feel premium, but the trunk has that “pinched” in feel like the front. I would have preferred the door handles to be body colored instead of chrome. The interior feels vastly upmarket than previous Altimas. Gone is the racy orange lighting replaced by upscale white lighting for the controls. The piano black finish on the controls cluster is a nice touch, although the gray color used on the center console does not mesh well with the rest of the interior.

Gone is the fun character of the previous Altimas. Even if you judge the Altima by itself, it is still not fun to drive. Going into a corner is met with significant body lean, and it plows straight ahead easily. The steering is vague, giving you no idea of what the front wheels are doing, and the weighting is off. It is very light while parking, but it weights up unnaturally as speeds rises. However, it is precise and accurate. Considering the Altima’s focus on comfort, the lackluster handling is tolerable. The ride shields occupants from any road imperfections well. It is absorbent on all except the worst roads. Even when the road surface is poor and littered with potholes and such, the Altima becomes a tad firmer than normal. Braking could be better as the pedal felt mushy. 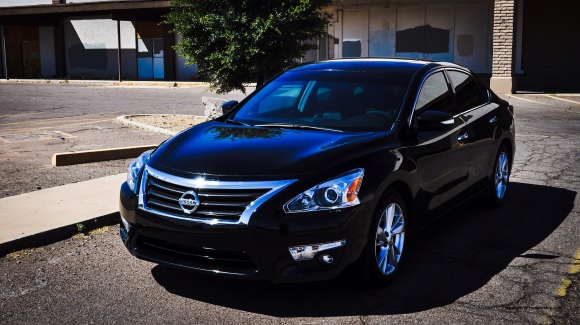 Altimas have always felt quicker than the average family sedan thanks to their engines. This Altima is no exception. This version is equipped with the 2.5 liter four cylinder engine, and at 182 horsepower, it feels much stronger than its horsepower rating suggests. It supplies power in a linear manner, and there is never a moment when you wish for more power. However, this Altima employs a continuously variable transmission (CVT) in place of a conventional automatic transmission. While I try to be open to the idea of a CVT, the Altima’s CVT makes me wish for a conventional automatic transmission. Whereas automatics have gears to shift through, the CVT uses one gear, and instead relies on a pulley system in order to move a gear up and down. This feature is supposed to move the car in a more seamless and efficient manner than a traditional automatic. While it is fuel efficient with fuel economy at 27 mpg city and 38 mpg highway, the transmission has a snappy feeling to it. When you depress the gas pedal for more power, the transmission sends revs soaring high, and it doesn’t stop when you take your foot off the gas. It also is not the smoothest. Also, this is the first generation in which a manual transmission is not available. A 270 horsepower 3.5 liter V6 is available.

When it comes to refinement, the Altima feels like a luxury sedan with quelled road and wind noise. The only noise comes from the engine. At low revs, it groans, and it creates a racket when its pushed.

Helping the Altima feel upmarket is its fit and finish. The cabin features splendid fit and finish, and decent attention to detail. Nissan had these cloth seats designed by NASA, which used foam in order to reduce driver’s fatigue. The seats are comfortable, except that they feel rubbery. A quick look online explained that the seats were grippy in order to prevent you from sliding around in the seats. There is abundant room in the front legroom and headroom wise, and visibility is excellent. The rear seat is huge, and three passengers can sit together in comfort. What draws my attention are the gauges. The trip computer in the middle of the gauges is very advanced for a family sedan. There is a “Altima model” in the interface, and you can even change the color of the car! This detail piques my curiosity. It is comprehensive too as you can move from the compass to Miles to Empty, etc. The trunk is huge, and should have no trouble swallowing up a family’s worth of luggage, and cabin storage is plentiful. The navigation system is intuitive although it can wash out in direct sunlight. The dual climate control system is a nice touch. 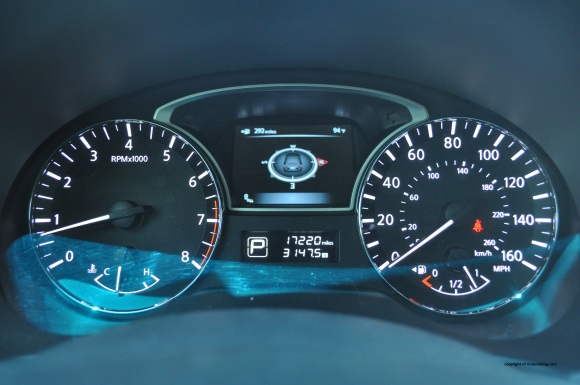 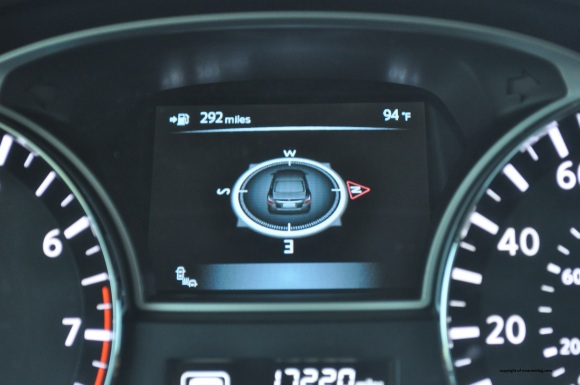 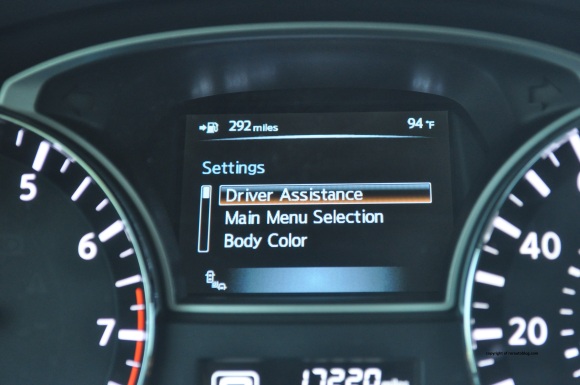 If it sounds like I am picking on this car simply because it does not drive like the older Altimas, you may be right. But I have two options, I can either lament how the Altima feels more like a Toyota or I can appreciate how accomplished the Altima is. Sure, the Altima is not about driving excitement anymore, but it feels a lot more refined and polished. With the 2012 redesign, Nissan bench marked the Toyota Camry, and I can say with great confidence that I would choose this over the Camry. With this car, you actually feel like you are getting your money’s worth. Most people, all they want after a long day of working is to come to a car that is relaxing and comfortable to drive, and that is what the Altima achieves. We had a rental Nissan Altima 2.5 S, and a six hour drive from Michigan to Indiana revealed how adept it is on long road trips. By looking at the big picture, I can appreciate the Altima.