The F denotes Lexus’ performance division. After seeing BMW and Mercedes-Benz with their successful M and AMG performance divisions, Lexus decided that it wanted in on the action. They chose the letter F because it holds a long history with Lexus. Back in the 1980s before Lexus launched in the 1990s, Lexus was marked as “Circle F’ in classified documents by its parent Toyota. The 1989 Lexus LS400 was codenamed the “F1” or the “Flagship”. In 2008, Lexus went to work at producing a rival for the BMW M3 and the Mercedes-Benz C63 AMG. The result of this is the Lexus IS F, which is the performance version of the IS compact luxury sedan. Cool fact: the design of the F in the logos represent the hairpin turns of Toyota’s Higashi-Fuji test track. My mother has a Lexus IS250, so I was also curious to see how this measures up, and as Lexus’ first performance car. END_OF_DOCUMENT_TOKEN_TO_BE_REPLACED

Even though Honda is one of the most valuable automotive manufacturers in the world today, that was not the case in the early 1970s. At this time, Honda was actually considering pulling out of automotive production.  Honda was a company known only for its motorcycles more than automobiles, and it did not fare well on the automobile front. This changed when it introduced the 1972 Civic which pulled Honda to stardom due to its combination of affordability, reliability, and fuel economy in wake of rising fuel costs. Nine successful generations would follow, including the fourth generation Civic that my dad had. My dad’s second car that he bought (First was a Ford Cortina) was a 1988 Honda Civic DX with a five speed manual. After the Civic, my father’s natural inclination was to buy more Hondas. The Civic was redesigned in 2012, and it received criticisms for its subpar driving dynamics, cheap interior materials, and middling styling, which were all unbefitting of a Honda. The 2012 Civic was so bad that Consumer Reports stopped recommending it which shows how serious this situation was. After just one year, Honda refreshed the Civic (As a rule, you refresh a car at three years) in 2013. END_OF_DOCUMENT_TOKEN_TO_BE_REPLACED

Infinti’s G Series started with the very first G20. Launched in 1990, the G20 was Infiniti’s effort at tapping into the entry luxury market dominated by the BMW 3 Series and Mercedes-Benz 190/C-Class. As a rebadged Nissan Primera, the G20 marketed itself as a sport sedan with the tagline, “Born in Japan. Educated in Europe. Now available in America”. Despite receiving critical acclaim for its sporting pretensions and overall competence, the G20 failed to make a dent in the entry luxury market. Infiniti temporarily discontinued the G20 after 1996. After a two year hiatus, Infiniti revived the G20 as a second generation model. This G20 also failed to garner the attention of luxury car buyers, and it was discontinued. In 2003, Infiniti’s owner, Nissan, was fustrated, and prompted Infiniti to get serious in making luxury cars. The G35 debuted in 2003, and it was based off Nissan’s FM platform which underpinned the Nissan Z sports car and the Infiniti FX SUV. The FM stood for front midship which meant that the engine was pushed all the way back as much as possible for better weight distribution. As a rebadged Nissan Skyline, the G35 was Infiniti’s first serious attempt at stealing buyers away from the perennial favorite, the BMW 3-Series. END_OF_DOCUMENT_TOKEN_TO_BE_REPLACED 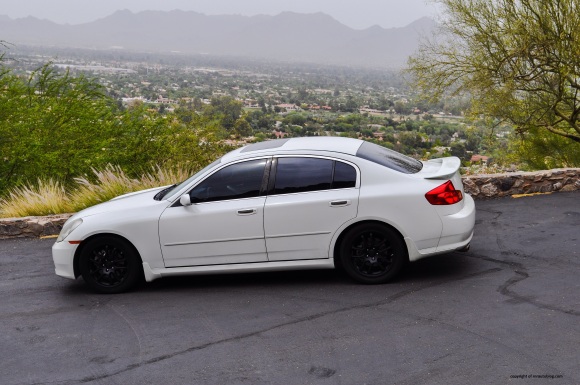 Competing with the Jeep CJ-5 and International Harvester Scout SUVs, the first Bronco debuted in 1966. With no automatic transmission or power steering option, the Bronco was considered very spartan for its time, but proved durable and capable off road. It become a favorite for off roading enthusiasts, and it was used widely for off roading competitions. This generation lasted 11 years, before a new generation of Broncos debuted in 1978. Starting from 1978, the Broncos were divided in two categories: the Early Broncos and the Full-Size Broncos. The 1978 Bronco was based off the F100’s platform, and used the truck’s powertrain and other components. Three more generations followed, and they were all a derivative of the F-Series truck. The last generation (1992-1996) was the most well-known, mostly because it was OJ Simpson’s vehicle in a  highly publicized car chase. When I asked my mother if she knew what a Ford Bronco was, she said yes. I was shocked, and I asked her if it was because of the Bronco’s heritage or its coolness factor. She asked me, “Wasn’t that the car OJ Simpson was driving in that car chase?”. Go figure. Ford discontinued production of the Bronco in 1996.

END_OF_DOCUMENT_TOKEN_TO_BE_REPLACED

Catering to the SUV boom that started in the 1990s, Nissan debuted the Xterra in 2000.  Marketed with the slogan, “Everything you need, nothing you don’t”, the Xterra catered to the adventurous and outdoorsy clientele. The first generation Xterra was derived from the Frontier’s chassis, classifying it as a body-on-frame SUV. It sold well, but it was criticized for its lack of refinement and compromised on road performance. I’ve had the opportunity to drive a 2004 Nissan Xterra SE with a four speed automatic transmission, and I was shocked at how poorly it handled, and how stiff its ride was. It was a cool car, but as an SUV, there were better options out there. The Xterra received a redesign in 2005, and stayed true to the previous generation’s values while offering more refinement and a better driving experience. END_OF_DOCUMENT_TOKEN_TO_BE_REPLACED