Before 2004, the Acura TL wasn’t considered a genuine rival to the BMW 3 series and Mercedes C class, which could be attributed to its image and dullness. The 2004 redesign changed that. Combining modern styling, sharp performance, affordability, and comfort, the TL surprised it’s German rivals with its competence. The fact it was available in Type S trim and with a manual transmission didn’t hurt either.The original TL (TL stands for ‘Touring Luxury’) was introduced in 1996 to replace the Vigor. The TL did not concern the Europeans as it had dull styling and underwhelming performance. Same thing applies to the second generation TL which debuted in 1999. It wasn’t till 2004 that Acura gave a car the Europeans were afraid of. It became the second best selling luxury sedan behind the BMW 3-Series in the U.S following 2004.

Styling wise, the TL is timeless. I prefer simple styled cars, and this TL is a prime example of why I do so. It does not look like a 2005. It looks new, as a result of its ability to age well. The styling is utterly simple, with its roofline, lights, and character line. But with a few tasteful touches such as the chrome grille, it looks elegant. What I really like about the design is that it is understated. It is just the right amount of understateness, but you still know it’s a luxury car. If I had to be nitpicky about the design details, I don’t like the top of the grille which cuts into the hood. But other than that, it’s a great design. The interior is both functional and attractive. As with the Acura RL I reviewed earlier, the gauges are futuristic. There is a luxury aura to the interior, so it is not as bland as the RL’s interior.

My attempt at doing an action shot.

My second attempt at doing an action shot.

Handling wise, I can see why the Germans were afraid of this car. The steering has a meaty feel, but it is light enough at low speeds, a boon when you consider that the 3 series’ steering is needlessly heavy at low speeds. The steering is tactile, and precise. Turn the wheel, and the car reacts sharply. Body control is impressive too. I took this car on a windy road, and the TL never faltered. One issue I have with the steering is the turning circle. The engine is transversely mounted, so there is not much space in the engine bay for the front wheels to move about. As a result the turning circle is miniscule. Do a U turn on a main road, and I guarantee you will not make the U turn. You will look like an idiot, because you will have to stop the car and reverse, and deal with the honking from angry drivers. This car is heavily front-biased, as its weight bias is 60/40, but you wouldn’t know it. Only at high speeds, the front understeers straight on. It does not drive as sporty as the 3 series, but it is no slouch. Some people might find the ride quality jittery, but I find it firm. Mind you, it does not raft through road surfaces like a Buick, but the ride quality is comfortable enough. Overall it is a decent combination of ride quality and body control. 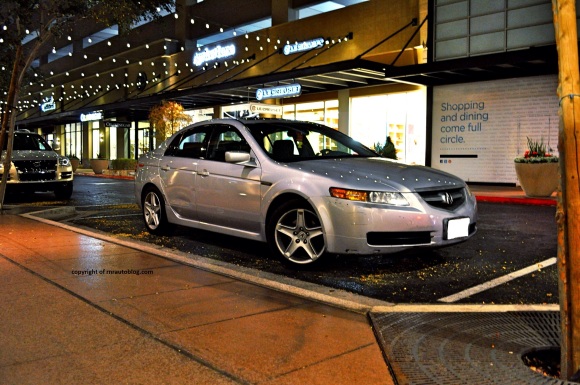 Supplementing the driving performance is a 3.2 liter V6 making 270 horsepower (later revised to 258). 23-25 mpg overall is possible. It is properly quick. Often, it is easy to set the little traction control light off as there is abundant amount of power. This car is front-wheel drive, so torque steer is mild in dry weather. But in wet weather, there was severe torque steer under hard acceleration. Pick up power is decent, and you never find yourself wanting for more power.  the 5 speed transmission shifts seamlessly. It can be a bit abrupt under hard acceleration though. A six speed manual transmission is available.

Refinement is excellent. As with Hondas and Acuras (Acura is owned by Honda), road noise is an issue. Coarse pavement surfaces increase noise levels in the cabin. Wind and engine noise is hushed however. Hondas and Acuras have excellent acoustic levels as well. This car simply loves its redline, as it purrs. 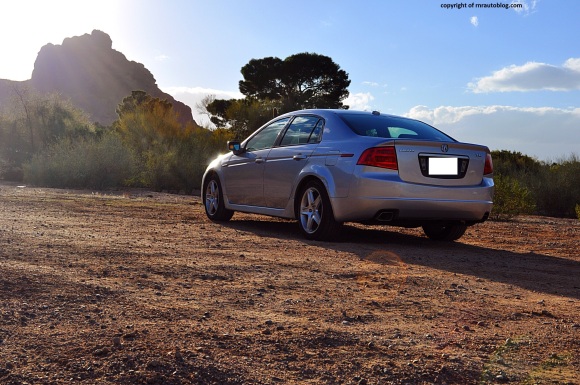 Inside, this car has all the attributes of a Honda family sedan. Not surprising, considering that this is based off the Honda Accord. The controls are intuitive, fit and finish is impeccable, and the seats are comfortable. Visibility is excellent as well. There are numerous storage spaces.There is enough room in the cabin for a whole family, although 3 adults may find the rear a bit tight. Trunk space is commendable as well. It is a shame that the rear seats do not fold down to make room.

I believe this TL is one of Acura’s best cars they have ever done. It is an unbeatable combination of reliability, comfort, sportiness, and luxury. On a personal note, this TL always had a soft spot in my heart. My uncle had a black 2004 model, and I was in love with it, and I begged him to hand it down to me. Selfish I know. Then sadly he traded it in for a new car. Recently, he confided to me, he still misses his TL. I have a friend who adores F150s. She would shed tears of joy if she ever got a brand new F150 in black with black rims. This TL is my F150. My ideal TL is a 2004 TL in black with either transmission or a 2007 TL Type S in Kinetic Blue Pearl with a manual transmission. Part of me wishes that Acura would get their act together. Trying to act cool with its acronyms such as SH-AWD, and whatnot… that is not working as the TL’s sales have decreased 50% with the latest redesign. Acura stuck to the basics and turned out a great car. Now, Acura is trying to be out of this world, and look at where it has gotten them. Like I said in the Acura RL review, change is not always for the better.